As a money manager, a tremendous amount of pride comes from watching an account grow over the million dollar mark. Many a millionaire has told me that true diversity has much to do with controlling one’s investments. My dad was famous for saying things like, “I never buy anything that I thought could be taken away later because of unforeseen circumstances (usually too much spending and debt on my part).”

Consider the profile of a millionaire-next door-type couple, Tommy Ol’ Clubs and his wife. You may have heard of the book, “The Millionaire Next Door”, by Thomas J. Stanley. If you know and care about a young person in school or who just graduated, please give them a copy. Anyway, the research that went into the book is quite compelling as the author sat down with over 500 millionaires to develop a sense of how these people really live.

In essence, let’s say Mr. Ol’ Clubs might seem to live a boring lifestyle, even common. His brand of watch is a Seiko, and his wife wears a Timex. He golfs every Thursday with the guys and uses Tommy Armour’s from twenty five years ago.  He says they work fine. The couple buys their clothes at Ross, J.C. Penney, and TJ Maxx. They have only purchased two motor vehicles in the past 10 years: both Fords. The current market value of their home is $285,000. Mrs. Ol’ Clubs recently paid for an $18 haircut. You get the point.

There is a lot of chatter among our media in this country over the claim by academics, like French economist Thomas Piketty, who argues that capitalism is creating vast dynasties of wealth that are hoarded by a select few, with money being handed down from one generation of trust-fund babies to the next. The super-rich get richer every year while denying the rest of us a chance, right? I don’t know and don’t bank my retirement on mulling around over this kind of false-rhetoric.

Here is what I do know. Take a look at the chart below, provided by Stephen Moore of Research Affiliates. Yesterday’s rich get poorer over time, not richer, and get rapidly eclipsed by a new generation of entrepreneurs and innovators who build their own new fortunes. Consider the Forbes 400 list of wealthiest Americans. Only one-fourth of the wealthy families in 2014 were on the 1982 list, and their aggregate wealth equals just 39% of the total wealth held by today’s elite. There is surprising dynamism at the top of the income pyramid and major turnover. The IRS sites that between 1992 – 2008 a total of 3,672 different taxpayers made it into one of the top 400 lists. Just half of them cleared the top 400 hurdle only once or twice during this 17-year period. 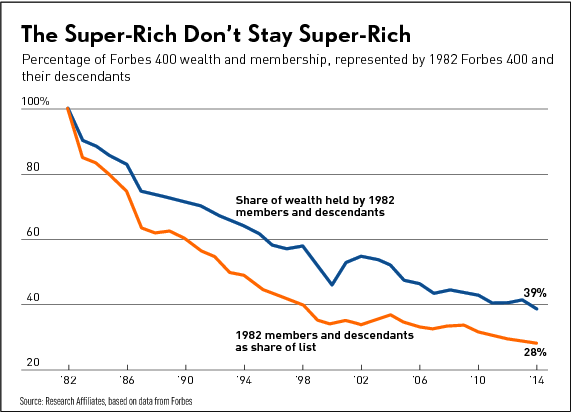 Why so much turnover? Most of the people on these tax lists are business owners; they often have a one-time spike in income when business is exceptionally good or in a year when they sell their business or stocks. They don’t make their millions year after year. Half the value of the U.S. stock market is in companies that didn’t exist 40 years ago.

It is clear, the wealth is recycled out to society at a blistering pace.   Forget the things you think are holding you back from becoming wealthy. Read the Millionaire Next Door. START SAVING EARLY & OFTEN. Own things (car, house, stocks, money decisions, etc). I’m not on the Forbes 400 list, but neither are any of the Carnegie or Vanderbilt heirs. Take control today. Sock away 10% of your paycheck, 10% of your lesson, bonus, or tournament winnings. If you feel like you’ve saved money since March 2009 but are reluctant in putting your hard earnings to work, give the professionals at B P Financial a call today.