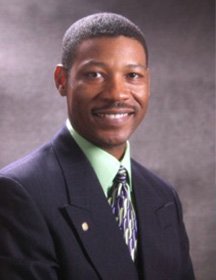 Quincy was brought from the south to the west coast by the US Navy. His first station was in San Diego, CA, but his ship was stationed in the dry docks at Swan Island in Portland. After serving in the US Navy, he returned to Portland and tried out a myriad of jobs in hopes of finding a career.

“I introduced myself to golf on my 21st birthday and was hooked after the first swing. I set forth in search of a career plan to allow retirement at 35 and pursuit of playing at the highest level I could for the rest of my life. At 27, I realized that life is precious and short with no promise of tomorrow so I set out to just play golf.”

He started his golf career in Player Services at Langdon Farms GC in Aurora, OR. With the encouragement of PGA Professional Robert M. Clark, Quincy was working as an Assistant Golf Professional within three months. He entered the PGA of America in 1998 as a Novice with no experience in golf. After years of hard work and dedication, he passed the PAT in 2001 and entered the Golf Professional Training Program (now the PGA Professional Golf Management Program) the following year.

“Just as I was beginning to feel disheartened… and about to give up on this career, Robert called me around December 2001 to ask if I would like to work for Portland Youth Golf Association (PYGA). I accepted almost immediately, but I had no idea of what I was getting myself into.”

This turned out to be a career in coaching youth and golf leadership. When Quincy was elected to PGA membership in 2006, he was promoted to Executive Director for PYGA, which was also designated as a First Tee program. In 2011, Quincy Heard, along with Kelly Hartley and Denise Shorthouse, created Summit Golf Foundation (SGF). SGF is designed to equip and challenge young people, particularly youth in the foster care system, to excel in life. The directors and volunteers at SGF teach positive character traits along with golf skills and course etiquette to youth in the greater Vancouver/Portland metro area.

In 2012, Quincy took on the added the responsibilities of the Men’s and Women’s Head Golf Coach at Warner Pacific College. Recently, at the end of 2016, Quincy was selected for the PGA LEAD Class of 2017-18, along with Robyn Lorain.

“I look forward to learning from our current leaders how and why they came into those roles. At the conclusion of the program, I hope to grow into the type of leader worthy of serving at the highest level,” Quincy said of his goals for the two-year program.

Quincy counts among his many accomplishments helping hundreds of youth matriculate to college with athletic scholarships and a 100% success rate of high school graduation. At the Pacific Northwest Section PGA, we look forward to what Quincy Heard will do next.

“My life experiences constantly remind me of a statement that Robert Clark, Sr. made to me in 1997, ‘Becoming and being a PGA Professional is more than a notion.’ I truly believe it is a never-ending journey that gives me the satisfaction of knowing that I AM a part of something special. And, being a PGA Professional, I can truly make a difference.”