“Economize. The secret to golf is to turn three shots into two”.

Under-saving isn’t a golf professional phenomenon. It’s a human phenomenon. There is a gap between the perception and reality of the amount of retirement income their savings can buy. Fifty percent of all Americans over the age of 65 are living entirely on Social Security. But some might say, “central banks around the globe have been printing money like crazy and it’s eating away at my wealth.” I don’t see what global monetary policy has to do with anything, because Americans save and spend in dollars, and the dollar is far and away the most credible currency in the world. Not that that’s saying much.

We’ve all heard of the adage, failing to plan is planning to fail. This holds true when saving for retirement as well. For people in the accumulation phase of life, that means a written, date-specific, dollar-specific retirement accumulation plan, premised on long-term historical returns. Once in retirement, it has to become a retirement income plan which, at historic returns, defends and even accretes purchasing power. What if I retire right before the next market crash and most of my holdings are in stocks rather than bonds/CD’s? There are a number of ways to manage this risk.

One is to start with two years’ living expenses in a cash equivalent, so that if the market goes south early you can moderate or stop altogether your withdrawal plan and live off the side fund. Another is to work part time and/or a couple of years longer. Another is to start a planned 4.5% withdrawal program as 2% the first year, 3 the next, 4 and then 4.5. Moreover, all these tactics can and in many cases should be combined. Finally, there are the so-called “living benefit” riders of variable annuities, which may very well have a place for some portion of the portfolio.

As far as the market crash, how to prevent it from reaching into my bank account and entire net worth. According to some measure, only one bull market since 1873 made it to seven years and that was from 1897 to 1903. We are six years into the most unloved bull market in most Americans’ lifetime, right? I guess if we torture the data long enough, the pundits would have you believe anything. Looking at the chart I’ve attached as a guide, I might argue we had a bull market from 1946 to 1968 (22 years) – which included one interruption by three relatively brief and relatively shallow downturns (less than 30% decline intra year). We had another bull market from August of 1982 to March of 2000, interrupted essentially by one day of horror in 1987 and a couple of blips in 1990 and 1998. These are recent bull markets and they are constant over the long run (5 year rolling periods), so why would anyone want to try and time them right before retiring in order to avoid losses? Peter Lynch said it best: “Far more money has been lost by investors preparing for corrections, or trying to anticipate corrections, than has been lost in the corrections themselves.” 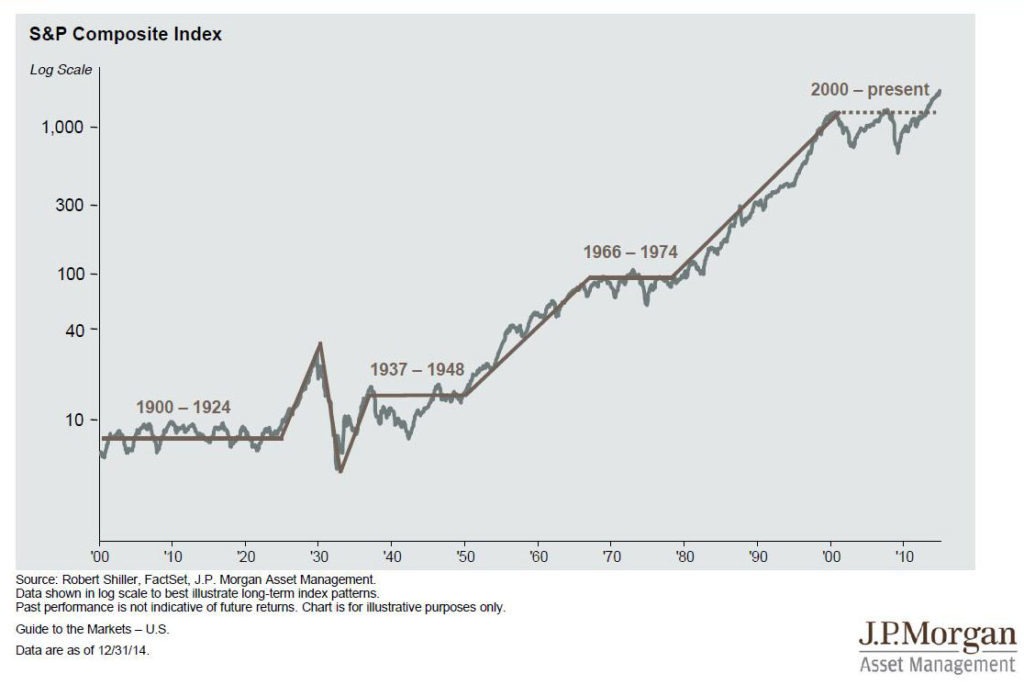 What is one area I tend to focus on a majority of the time as an advisor? When an American (or couple) steps across the threshold of retirement, they find themselves facing two doors. Door number one says their money is going to outlive them. Door number two says they outlive the money. It’s as stark and as simple as that. Forget debt, the demographics of aging (many experts say the first person to reach age 150 has already been born), unfunded entitlements, global monetary policy, and all those other imponderables we can’t predict, much less control. It’s similar to converting three shots into two shots on the golf course. Focus on what we may be able to control. If you would like to know your situation down to the dollar and how much those dollars are going to carry you, give the professionals at B P Financial a call today.