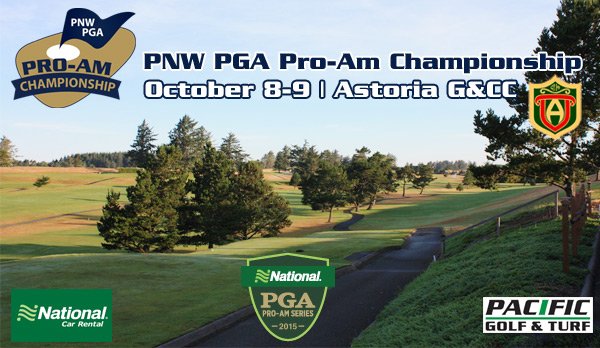 We are now accepting entries for the Pacific Northwest PGA Pro-Amateur Championship. This year’s championship will be held at the beautiful Astoria G&CC on October 8-9, 2015.  PGA Professional John Kawasoe is excited to host.

2. Seventy percent of the field is reserved for players who have participated in 4 or more Section events played since the close of entries for this event the previous year. Priority within this category is based on receipt of entry and will expire seven days after entries open*.

3. The balance of the field is based on receipt of entry.

*The early deadline for the second category is Wednesday, August 19 at 5:00 pm. Click here for the list of players in this category.

Pacific Northwest Pro-Am title sponsor, National Car Rental, asks for one thing: for all players to enroll in the Emerald Club. This FREE service helps you bypass the rental counter and helps you apply your PGA discount online. The sign-up process takes only minutes. Thank you for supporting this important sponsor!

In addition to the regular payout available to all players, there will be an additional $7,500 bonus pool paid to the top 50% of the field to teams that are eligible. To be eligible for the bonus pool, both players on the team must be Emerald Club members (current membership qualifies).

Be sure to use PGA discount code XZ41570 when you rent from National.
We are also very pleased to welcome Pacific Golf and Turf and Haas-Jordan as our supporting sponsors this year as well.

The Pacific Northwest Professional-Amateur Championship started when a young head professional named John Junor and his amateur partner won back to back titles at the magnificent Seattle Golf Club in 1924 and 1926 (no championship in 1925). Professional Walter Pursey and amateur Harry Givan topped Junor in the late 30’s with a three-peat victory at Seattle GC twice and Alderwood GC once. As the years went on, many great players etched their names into the record books as champions of this event. Long time professional Don Bies and his partners have seen numerous championships winning three of them in 1961 at Glendale CC, 1964 at Seattle GC, and in 1966 at Yakima CC. Other greats such as Bunny Mason (1963) and Jerry Mowlds (1969, 1978) have all had their share of the title.

Last year, PGA Professional Brian Nosler of Golf in the Pearl and his amateur Spencer Klapp came out on top after going into the final round two strokes back of the leaders, by finishing their last hole with an eagle, which was enough to capture the win by one stroke. Nosler had 174 yards into the last green where he hit it to 12 feet and drained the eagle putt.

Astoria Golf and Country Club began in 1923 and is considered one of the northwest’s premier private golf clubs. The unforgettable and challenging 18-hole golf course, built on top of ancient sand dunes near the Pacific Ocean, is one of Oregon’s hidden gems and host to the annual Oregon Coast Invitational Tournament.   In 1997, the course was ranked #89 in the Top 100 Classic Courses in the United States by GolfWeek Magazine.

Host of the 2016 PGA Professional Championship!

This is your chance to get a preview of the course in top, championship conditions. Designed by George Junor and Charles Haldeman and completed in 1924, Astoria offers a unique layout built between rolling sand dunes and using the natural lay of the land.

This is a fun event for you and your friend, starting with golf, then dinner, finally ending with more golf! You’ll get to relax and enjoy a hosted dinner at the Astoria G&CC club house after round one of the tournament.

And while you are in town to enjoy this amazing course and tournament, you may want to enjoy some of the fun, unique things to do around Astoria.

Shallon Winery has been called the “Willy Wonka of Wineries” for the truly unique tasting experience, colorful historic building, and popular chocolate and fruit wines.  http://www.shallon.com/

Fort George Brewery offers over 40 varieties of beer to try, in another historic Astoria building! http://webpages.charter.net/astoriatrolley/

We hope to see you in Astoria in October!