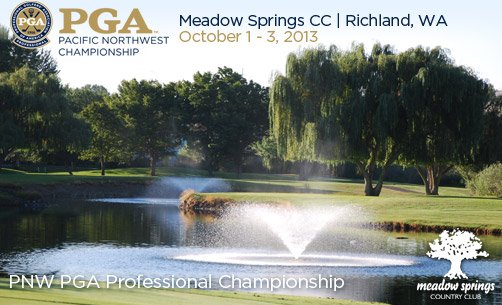 We gained approval from National to accept post entries for the Pacific Northwest PGA Professional Championship on October 1-3.   If you already entered through the PGA, thank you!  We’ll see you at Meadow Springs CC.  Post entry deadline is Wednesday, September 18th at 5:00 PM.

2.  New Members elected after the deadline.

3.  Members who had a schedule change.

4.  New Members to the Section who DID NOT enter the PPC in their original Section.

**Remember that this is the last Section major to gain Hudson Cup points and Hudson Cup Points are worth 1.5 points.

~History of the PGA Professional Championship~

Meadow Springs Country Club offers one of the premier golf courses in Washington State. The club was incorporated in July 1973. Its 18-hole private golf course was designed by Robert Muir Graves and is one of Washington State’s top rated courses.

From 1993 to 2001, Meadow Springs CC hosted the Web.com Tri-Cities Open which was one of the Tour’s most popular tournaments.