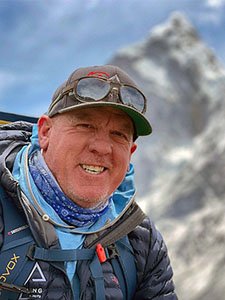 This month we profile Steve Stevens, PGA, who recently summited Mt. Everest. Read on to learn about his thrilling adventure!

Steve Stevens: golf professional, seasoned mountain climber. He may just be the first and only PGA Member to have summited Mt. Everest. Originally from Rockford, Washington, he moved to Montana in 1999 to become an Assistant Golf Professional at Meadow Lake Golf Club in Columbia Falls and was elected to membership in 2005.

Although it wasn’t originally his dream to become a golf professional, “I met a guy in college that didn’t even know which end of a golf club to hold and I taught him how to golf.  He went crazy over golf and called me one day to say, ‘I’m moving to California to become a golf pro’. You all know him better as Bill Morach, PGA, Eugene Country Club.  I thought, ‘If Bill can do this, so can I.’”

Stevens also set his sights on the highest peaks. “My mother says I talked about Everest even as a young child. I don’t remember that, but I do remember thinking I would like to climb it someday.” In college, he took up rock climbing in the Leavenworth area and climbed Mt. Adams. Upon moving to Montana, he began hiking regularly, and today has completed almost every trail within Glacier National Park.

In 2016, a friend inspired Stevens to take a trekking trip around the mountain passes of the Himalayas of Nepal, where he got his first glimpse of Everest. The following year, he decided to begin serious training by climbing Aconcagua in Argentina – the highest mountain in the world outside of the Himalayas. Unfortunately, he suffered a terrible fall from a roof in November 2017.

“I was told I would never play golf again.” Undeterred, after surgery and six months of rehab, he was swinging a golf club again and even placed fifth in the Chapter Championship. He went on to climb Aconcagua in January 2019.

When the golf course opened the following spring, some of Stevens’ members began taking an interest in his climbing. “That’s when I really started thinking about Everest.” The next step in training was Kilimanjaro, Africa’s tallest mountain in December 2019. Finally, Everest was booked for the spring of 2020. Just in time for COVID-19 to shut the world down.

Waiting an additional year, Stevens was able to go to Nepal in the spring of 2021. After weeks of training and acclimatizing to the thin air, he summited Everest on May 12 at 5:54 am.

Stevens, who is a PGA Hope trained golf instructor, carried 10 folded Folds of Honor flags with him to the summit. “Since I was so fortunate to receive backing for my expedition, I wanted to give back somehow.” He hopes to auction the flags to get donations for Folds of Honor.

“I learned that we can do anything we set our mind to,” said Stevens of the experience. Like golf, “climbing is an extremely mental game,” and all the steps he put in at work at the golf course gave him surprising endurance. He still hasn’t regained feeling in three frost-bitten toes, though.

He plans to climb the Seven Summits, the tallest peak on each of the seven continents. Everest was number three on the list. Next up? Vinson Massif in Antarctica, scheduled for December 2021.

“Adventure as much as possible and chase your dreams.” 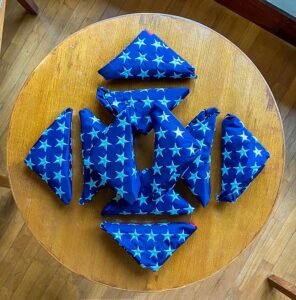 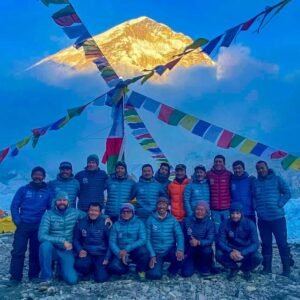 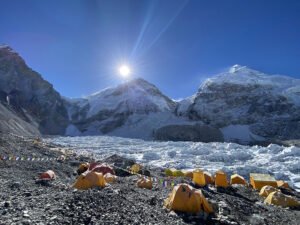 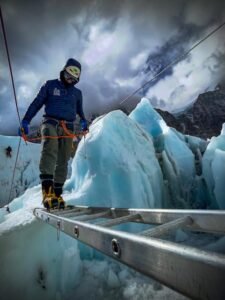 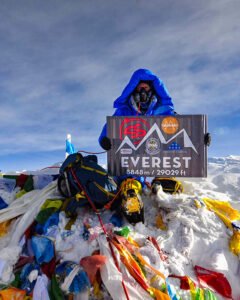 Steve Stevens at the summit of Mt. Everest