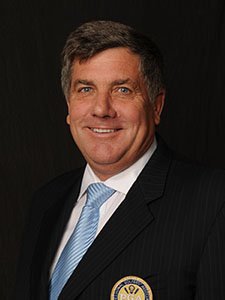 This month we interview Brian Whitcomb, a founding member of Folds of Honor. Originally, from the Northwest, most of his career took place in the Southwest Section where he served as its President as well as represented District 14 on the National Board.  He also served as the National PGA President in 2007-2008. He now resides in Bend, Oregon where he owns and operates Lost Tracks Golf Club.

Tell us about your golf beginnings.  How did you get started?  Who are or were your mentors?

I got my start at the Prineville Golf Club.  When PNWPGA legend Jim Wilkinson came home from Vietnam, he taught me how to play.  I was about ten years old.  His father Bill was the head professional. I watched in awe as Jimmy would hit hundreds of balls every day.  Of course, my job was to pick them up as we only had shag bags and no formal range.  At the end of the day, Jimmy would teach me for an hour.  I caddied for Jim around the Northwest and the seed was planted.  Watching Jerry Mowlds, Bill Eggers and many others play the game influenced me a lot.

How did you get involved with the Folds of Honor Foundation? Please tell us how this incredible charity came to be.

Regarding the Folds of Honor, then Captain Dan Rooney contacted me while I was serving as PGA President. He told me his story, sent me an entry form and invited me to their first fundraiser in Grand Haven, Michigan.  Patriot Golf Day quickly became the centerpiece of FOH.  We raised about $7,000 and thought we hit it out of the park. Like all of us, once you meet Dan Rooney, hear how pure the Mission is, you can’t help but climb on and help in any way possible.  My time on the FOH Board has been the most rewarding time of my life.  Please know that we are at gold standard levels when you compare donations to actual dollars that get directly to the cause.  Approximately 85-90 cents of every dollar flows through to provide needed scholarships.  I thank each and every PGA Member who raises funds for this most worthy of causes.  I also know that 2020 has been, among other things, a difficult year for golf outings.  Once we get back to some sort of normalcy, I hope that you will continue to put on FOH Fundraisers.  Together we are making a difference in the lives of families who protect us every day and so deservedly accept our support.