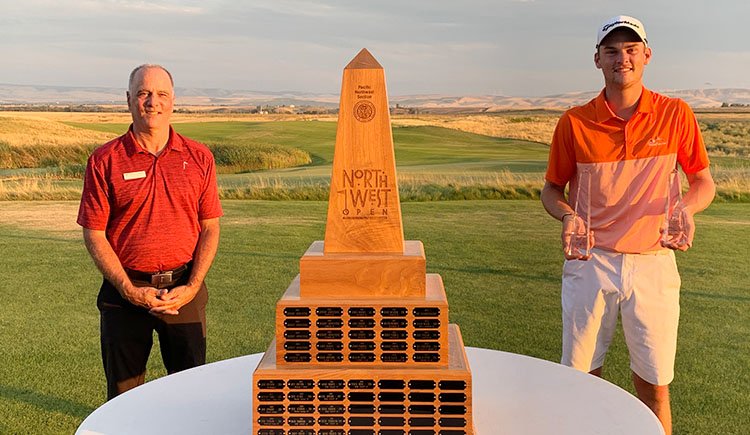 Amateur Nathan Cogswell of Meridian Valley CC won the Northwest Open Invitational by one stroke over PGA Professional David Phay of Whidbey G&CC.  Cogswell is a junior at Seattle University and this marks his first PNW PGA win.  He fired rounds of 68-66-134, 10-under.

The Pacific Northwest PGA is proud to have a supporting field of sponsors including Muckleshoot Casino, Universal Refrigeration and GT Golf Supplies.

The early years were dominated by Seattle Golf Club’s Robert Johnstone (who won 6 of the first 10 events) and “Long Jim” Barnes.  Barnes, the professional at Tacoma C&GC from 1911 – 1915, won the first two PGA Championships (1916, 1919) in addition to the 1921 U.S. Open and the 1925 British Open!  Spokane’s Marvin “Bud” Ward captured six championships over a 22-year span, five as an amateur and his last as a professional.  Bud was also a National Amateur champion and may have won a few more, but for the lack of championships during WWII.

Wine Valley Golf Club was named in the “Top 100 Courses You Can Play” by Golfweek in 2019 and has been awarded many other honors since opening in 2009. This stunning Dan Hixson design unfolds on a grand scale, playing over rolling hills in the shadow of the Blue Mountains.  Wine Valley GC has broad fairways, dramatic bunkers, and bold, undulating putting surfaces.