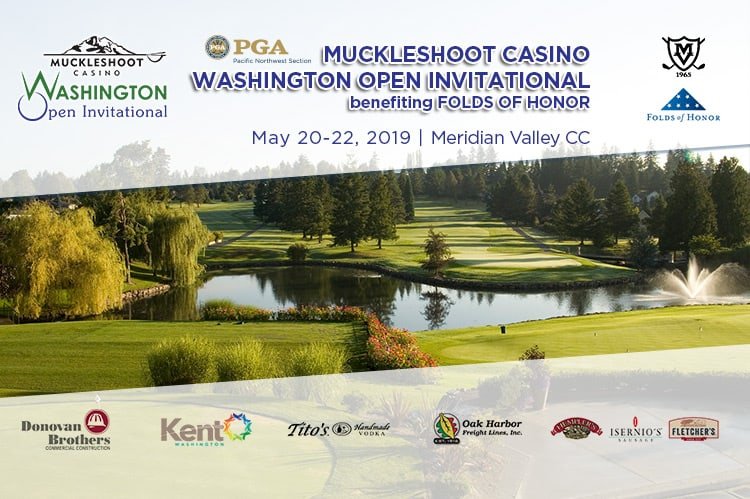 Meridian Valley CC Director of Golf Greg Manley invites you back to MVCC for the Muckleshoot Casino Washington Open Invitational.  The pro-am benefiting Folds of Honor will take place on May 18-19 followed by the championship on May 20-22.

We return with the ever-popular 54-hole individual stroke play NO CUT championship format.

The 2019 Muckleshoot Casino Washington Open Pro-Am benefits Fold of Honor. Folds of Honor is a 501 (C)(3) charitable foundation supporting scholarships and assistance to the spouses and children of those killed or disabled in military service to America. Check out this video about the Pro-Am, produced for the PGA Centennial Section Spotlight about our Section! For more information, please visit https://www.foldsofhonor.org.

Why We Love It

“The Washington Open is the tournament I would most like to win as a player. What this event does for the Folds of Honor and local community is something that we should all be proud of, and proud to support. In addition to the impact on our community, being able to play in front of friends and family on a challenging golf course is something I don’t experience very often.” – Shane Prante, PGA

Excellent Competition with NO CUT

The Washington Open Invitational dates back to 1922. In that year, young Al Espinosa captured the crown at Yakima CC. Some big names have won this event over the years including the Zimmerman brothers, Al and Emery, along with Chuck Congdon, Al Mengert, Senior Tour Player Rick Acton and PGA Tour Player Fred Couples.

There have been some amazing champions since the event started. In 2016, Jeff Coston claimed his fifth Muckleshoot Casino Washington Open Invitational title adding to his wins in 96, 99, 2001, and 2010, tying him with legend Chuck Congdon in the most Washington Open Championships of all time. Chuck Congdon held the record for the most wins (39, 47, 50, 52, and 62) while Al Mengert holds the record for the most consecutive wins (63, 64, and 65). The current tournament record is held by PGA Professional Tim Feenstra of Broadmoor GC (2011) and PGA Member Jeff Gove (2012).

Meridian Valley CC is championship golf at its most beautiful. This exceptional 18-hole layout was designed by Ted Robinson, one of the nation’s leading golf course architects, who chose the site based on the stunning views the surrounding area provided. MVCC opened in 1967 with 9 holes ready for play. The second nine holes and clubhouse opened in 1968. Over the years, MVCC has grown into one of the Northwest’s most respected golf courses. MVCC hosted the Washington Open Invitational in 1972, 1976, 2002, 2004, 2005, 2009 and 2013–2018. They also hosted the SAFECO Classic from 1982-1999.

While you’re in town, check out our title sponsor! Muckleshoot Casino offers over 3,100 video gaming machines with the greatest variety of game themes under one roof. It also offers a variety of table games including $1 Blackjack and 25¢ Roulette, as well as the largest non-smoking Poker Room in the State! The Casino also has 8 tasty restaurant choices to satisfy your cravings, 6 different bars, and a variety of special guest entertainers at no cost. If that isn’t enough, make sure you hit up the HUGE BINGO HALL located just across from the Casino.