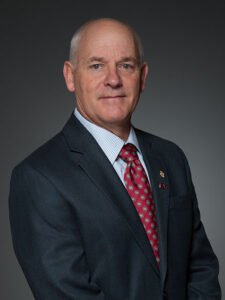 Hometown: Grew up in Moscow, Idaho.

Mark Keating began his career at Bend Golf Club as an assistant to Craig Griswold. Tour golf took him to Australia and New Zealand. He was the Head Professional at Shadow Hills for 13 years. Since then, he’s been in and around Portland, and is now back at the Reserve with Craig Griswold, where he was instrumental in coordinating the Portland Metro Junior League Golf.

“I knew early on that it would be a winner, so the first year I put in a lot of time to get a nucleus going here in Portland. The program is a real winner for everyone and should last a long, long time,” said Keating.

Not only was Junior League Golf (JLG) a success, but Keating extended the program to create a fall league.

“JLG is great but not geared for fall,” observed Bryan Tunstill. “He started the informal Fall League, organizing it and spearheading the whole thing.”

The fall league proved to be very popular, with eleven clubs participating. Keating modified the format a bit as follows:

Feel free to try these ideas, or come up with your own fall league format at your facility. The benefits that Keating saw were great.

“The clubs benefit from new families that spend a lot of time at the facility,” said Keating, “and the kids themselves get a wonderful introduction to the game,” including experiencing the team environment and playing many great golf facilities. The kids build lifetime relationships with their new friends and their coach. Professionals also benefit from the new relationships, as well as the word-of-mouth advertising that comes from a quality program.

When the Portland all-stars made it one step from the PGA JLG National Championship in 2015, the entire community learned about the league, bringing valuable exposure to the PGA and all the Professionals who participated by hosting teams.

Thank you, Mark Keating, for sharing your success story!