As a continuation of my article printed in the Foreword Press for August, I am looking to build on the concepts and entrepreneurial example even further.  In this case, I would like to highlight a couple of “Young Guns.”  What I can admire about the two professionals we’re going to highlight is they both did the following:

If you’re a younger golf professional, either a PGA assistant or apprentice, I believe you’ll see there IS OPPORTUNITY…and quite possibly, much more than you’d even imagine.  Your supervising professional may be swamped, or just spread too thin to take advantage of the opportunities that exist.  In many cases, I also believe the senior golf professional and senior management will be supportive when they see the net results of your effort(s.)  In fact, they often wish their younger assistants/apprentices would step up and “take the bull by the horns.”  With this in mind, ask yourself:

As with the examples in last month’s article, I feel a strong sense of pride as a colleague of the two “young guns” highlighted, but more importantly, I AM INSPIRED by their efforts, creativity and entrepreneurial attitude…I hope you are too. 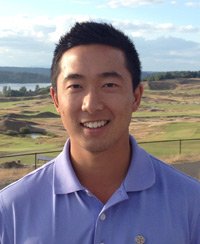 Success #1 – Get Golf Ready (GGR): Chambers Bay had 20 students in 2012; Ryan is expecting double that this year.
Success #2 – GGR2:  A majority of GGR students move up to GGR2, which consists of 2 one-hour lessons with pre-play warm-up, orientation, etc .
Success #3 – GGR3: The third level of Get Golf Ready consists of an expanded “Nine & Dine” experience.  It includes on-course education, plus teaching students how to be a good customer of the facility.

Young says: “I knew that GGR would be good for me to build income and value at Chambers, but I didn’t know just how much—from 10-15 lessons in a season, I now do 20-30 per month. These classes have helped me build my income hugely.  I’m almost making another paycheck per month in lesson income. Chambers has been 100% supportive. Matt, Nick and Brent [the Chambers Bay management team] have seen the success, the financial impact GGR has made and they’ve made real efforts to support me, including adjusting shifts, covering shifts occasionally and even hiring a seasonal shop closer so I could be free to create more Chambers customers through GGR.”

The Creek at Qualchan
Spokane, WA

Success #1 – Winter Lesson Series Program: With full support from Mark Gardner, PGA, Siesser took the typically four “dead” months  and created a “winter series” program using the restaurant space that is closed for winter to teach.  Derek planned to have 35 students at $360 each ($500 for two.)  The plan included unlimited lessons, (max of 1x per week) and a playing lesson once the course opened up in the Spring.  Results: Had to open up to 6 days a week, and finished with 49 students.