The elite field of players from across the United States as well as China, France, Singapore and South Korea includes all 2013 PGA Junior Series event champions, 41 PGA Section winners, many of Polo Golf and Golfweek’s top-ranked players, and selected national junior tournament winners. 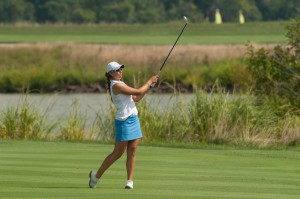 Gigi Stoll watches her shot on the 10th hole during the third round of the 38th Junior PGA Championship, at Trump International Golf Club, Washington D.C. on August 1, 2013 in Potomac Falls, Virginia. (Photo by Montana Pritchard/The PGA of America)