PGA Professional Ryan Benzel of Pro Golf- Lynwood (Lynnwood, WA) won a sudden-death playoff over Jason Pitt of Chewelah G&CC (Chewelah, WA) and Corey Prugh of Manito G&CC (Spokane, WA) to claim the Pacific Northwest PGA Professional Championship. Benzel lead after round two and opened the final round with three straight birdies, birdied 10 to go five under for the day and then parred the final 8 holes and held on for the victory. Pitt fired the day’s low round of 64 to get into the playoff including a 31 on the back nine.

There currently are 33 players at 144 (par) or less after two rounds.

PGA Professional Jason Pitt of Chewelah G&CC got on a hot streak making eight 3’s during his round of 68. PGA Professional Scott Erdmann of Oswego Lake CC also was hot along the way to his 69 he made two back-to-back eagles.

Congratulations to PGA Professional David Kass of Salish Cliffs for his hole-in-one on Hole #16! He aced the 176 yard hole with a 7 iron.

Results will be posted at regular intervals throughout the day at https://www.pnwpga.com/pdf/resultsppc12.pdf “Almost live scoring” will begin at 10:00 am each morning after the groups begin turning. Be looking to see if one of your friends posts a low score!

CLICK HERE to view past champions of the PGA Professional Championship. 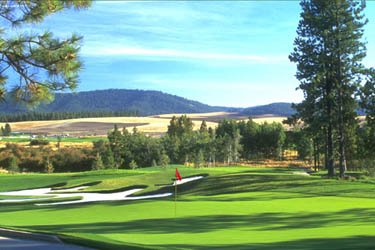 Circling Raven GC was designed by Gene Bates, Circling Raven has consistently been rated as one of the top Resort courses in the country. Golf Digest and Golf Magazine Golf World have rated it in their Top 100.  The course meanders through 620 visually stunning acres adjoining the Coeur d’Alene National Forest.