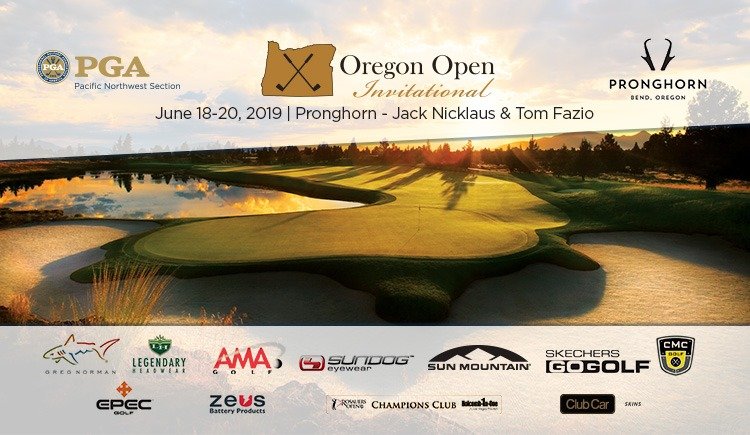 The Oregon Open Invitational is under way at Pronghorn in Bend, OR.  We have 104 PNW PGA Professional and 104 amateurs all vying for the title of Oregon Open Invitational Champion. In addition to the individual title, there is a 36-hole (best 2 of 4 net) team competition and pro-am four-ball.   The second round will be followed by a cut and repairing of the top 70 players and ties.

This championship dates back to 1905 when sheep mowed the fairways at Waverley CC. George Smith, a Scot from Oakland, CA, won the Oregon Open’s inaugural championship, including a course record 74. Little did he know that some of golf’s most prestigious names were to follow in his footsteps such as Tommy Armour, Horton Smith, Chuck Congdon, Bob Duden, Bill Eggers, Jerry Mowlds, Pat Fitzsimons, Rick Acton, Peter Jacobsen, Jeff Coston, and Mike Davis.  And only three men have won the title three or more times; Bill Porter (3), Rick Acton (4), and Bob Duden (8).  The tournament scoring record is held by Brian Nosler at 198, set in 2009 at Brasada Canyons.

CLICK HERE – to view past champions of the Oregon Open Invitational

The clubhouse and Tom Fazio Championship Course opened in 2007, creating the ultimate golf experience in Central Oregon. The masterful Tom Fazio designed par 72, 18 holes and 7,462 yards course blends the complexity of championship golf with the inherent aesthetic of the natural terrain.

Results will be posted at regular intervals throughout the day at https://2019secoregonopen.golfgenius.com/ “Almost live scoring” will begin at 10:00 am each morning after the groups begin turning.  Be looking to see if one of your friends posts a low score!