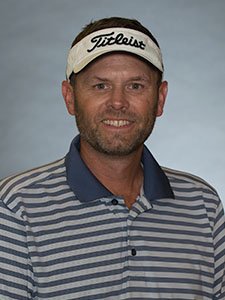 This month we profile Mark Tunstill, PGA. Not only is he a highly involved senior player, but he has also donated countless entry fees to young professionals in the Section and Oregon Chapter to provide them with the opportunity to play as well. When he was a young professional, he was inspired by some of the greats in our section including Brent Murray and Pat Fitzsimons.

Tell us about your golf beginnings.  How did you get started?  Why did you decide to pursue this career?

When I was about 8 years old, my father and grandfather would take me to the golf course with them in Southern California and I would drive the cart and hit a few shots.  Soon, a few shots turned into playing 9 holes.  By the time we moved to Oregon, my brother and I would play golf just about anywhere we could.  Tuna cans were used as cups, which we would dig out and place into the ground of the local elementary schoolyard.  We would also hit tennis balls throughout the makeshift course we constructed behind our neighbors’ houses and shared lawns. I’m sure they love us for it!

As I grew older, I became infatuated with golf.  My father was a sales representative and would often be invited to play in the charity pro-ams that the companies he represented would sponsor.  Having an inside the ropes experience alongside the game’s greatest was all it took for me.  I still have a picture of my father, brother and I at the Fred Meyer Challenge (Portland Golf Club) with Fuzzy, Arnold, Watson, Peter, Norman, Strange, Freddy and Chi-Chi.  Bryan and my dad were wearing shorts way too short and somehow they let me in with a tank top.

By the time I went to college, at the University of Oregon, I had decided that I would try to walk on the golf team. Kreiger cut me after shooting 80 (or more) in “qualifying”. I respect that and I think the world of Scott.  During the summers, I found a job working in the bag room at Oswego Lake Country Club and was able to slide into the golf shop when an opening became available.  I spent my apprentice years at Oswego Lake and became a member in 1993.  In 1994, a group of members raised a whole pot-load of money for me to give playing a shot.  Over the course of about 15 months,  we moved to Florida, played the Gold Coast Tour for a year, went to tour qualifying school and came back to Oswego Lake.  Still one of the best times of my life.

Who were your mentors in golf?

I have more mentors than time to write about them.  Brent Murray is hands down the nicest, hardest working PGA professional I have ever known. Through his actions, he showed me how to treat people with respect.  Pat Fitzsimons once sent me a handwritten note and a small newspaper article congratulating me for shooting 65 in a pro-am.  For crying out loud, he won the LA Open and took the time to inspire a young kid.  Don’t ever underestimate those notes.  And most importantly, my wife Charlee, she has always been supportive, loving and the most amazing person on the planet.  If you know her, you know exactly what I mean.

What is your favorite Section or Chapter event?

My favorite Section event is the next one that I am able to play in!  I was fortunate enough to qualify for the National Senior Club Professional Championship the two years following my 50th birthday.  I might have made it last year if I had not hit my putt from the wrong ball marker on the 17th hole, but hey, we’re seniors!