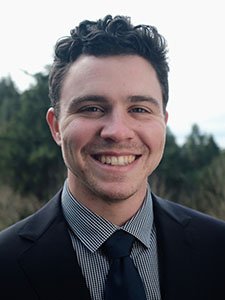 We are pleased to announce Alec Bahnick, PGA has been selected as the Executive Director of the Central Washington, Inland Empire, and Western Montana Chapters.

Mr. Bahnick, a graduate of Eastern Kentucky’s PGM Program, was an intern at the Pacific Northwest PGA Section in the summer of 2019 under the mentorship of Molly Cooper, PGA and Jeff Ellison, PGA. Most recently, Alec was an Assistant Golf Professional at Seattle Golf Club under PGA District 14 Director, Doug Doxsie.

“I could not be more pleased with this search‒from the first step to the selection‒we did this in concert with the chapters which Alec will serve.  The process to redefine and search for this position was truly a collaboration between the section and the three chapters,” said Frank Talarico, CEO.

This full-time position will provide administrative support to the Central Washington, Inland Empire, and Western Montana Chapters; assisting each of the chapters’ boards of directors, managing chapter communications and providing support to on-site chapter tournament personnel.

Talarico continued: “The ED position is now solely focused on serving central and inland Washington, northern Idaho and western Montana without distraction or competing priorities. Alec is extremely well qualified for this role, and well positioned to truly make a difference for our members.”

The Pacific Northwest Section PGA was founded in 1922 and includes 1,100 PGA members and apprentices in Washington, Oregon, northern Idaho, western Montana and Alaska. The mission of the PNW PGA is to serve the PGA professionals in the Northwest and grow the game of golf. The PNW PGA is governed by a volunteer Board of Directors made up of golf professionals throughout the Section, who are elected into service. It is a 501(c)(6) non-profit association.