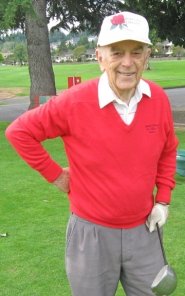 We have recently learned of the passing of Bob Gasper of Tigard, Oregon, who passed away last November at the age of 89. A PGA member since 1962, he began as an assistant at Columbia Edgewater CC in 1959 and was most recently the head professional at King City GC from 1993-2008. During Bob’s decades of playing golf, he has had two holes in one and two double eagles. For his first double eagle, “Golf Digest” sent Bob a certificate of recognition for making three under par on the 10th hole at the Portland Golf Club, which was the only one in the U.S. at that time.