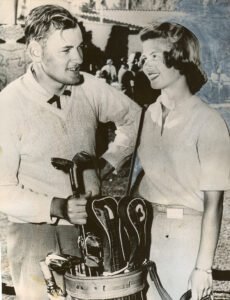 Pacific Northwest Golf Hall of Fame member Al Mengert passed away at age 91, one day before his birthday. Mengert grew up in Spokane, WA and became a highly accomplished golfer in his youth. He won the 1946 and 1947 National Jaycees Junior, considered the precursor to the U.S. Junior Amateur. Mengert was the top-ranked amateur in the world in 1952, when he won the Northwest Open Invitational. Later that year, he ended a remarkable amateur career to become a PGA Professional, where he would rise to even greater heights.

Mengert played in PGA events and later Senior PGA tournaments while serving as a head pro around the country, including Tacoma Golf and Country Club. He won the 1966 Northwest Open Invitational as a professional at Tacoma C&GC. He won the Washington Open Invitational four times: in 1963, 1964, 1965 and 1971 and holds the tournament record for most consecutive wins. Mengert also won the PNW PGA Professional Championship in 1968 and 1969.

There is no doubt that Al Mengert is one of the greatest club-pro players in history. He played in a total of 27 majors and eight straight Masters. His best Masters finish was in 1958. He was tied with Arnold Palmer with six holes remaining. Palmer played the last six holes in 2 under and Mengert was 3 over; Mengert finished in a tie for ninth.

Spokane native and decorated golfer Al Mengert passes away at 91