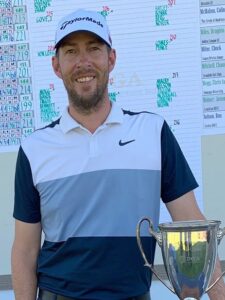 This month we interview Scott Erdmann, winner of the 2019 Rosauers Open Invitational. In 2011, Scott was runner-up in the PGA Professional National Championship.  Scott played his last 14 holes two-under par to earn a spot in the playoff before bowing to the eventual champion, David Hutsell.

Tell us a little bit about your career. Who or what inspired you to get into golf?

Now that you’re secured the Rosauers title, do you have any other PNW PGA majors in your sights?

I’m sure hoping I’ve broken the seal and there’s more to come. I’ve been knocking on the door for a while and over the years I’ve had a number of chances, so it’s great to finally have broken through. Certainly having gotten this victory, it gives me a positive memory to rely on when trying to close out a tournament.

2011 was an incredibly special year and the chance of recreating those memories would be amazing! Winning a Section Major, making the Hudson Cup team and qualifying for the PGA Professional National Championship will always be my goals and what I would define as having a great year.

Who is your favorite golfer?