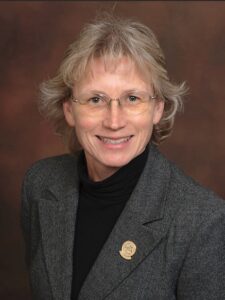 This month we interview Kathy Brown, who recently earned a spot on the USGA Rules Committee. She is also the 2015 and 2016 PNW PGA Perry Williams Award winner.

Most of my work experience had been in the military and small business ownership when I took a part-time job as a Shop Assistant at Esmeralda Golf Course in 2003 for fun.  I quickly had all of the responsibilities of an Assistant Professional, so Rex Schultz suggested I pursue certification.  I worked for Rex for 14 seasons before moving to Twin Lakes Village GC in 2017.

How did you get into being a rules official?

During my quest for PGA Membership, I encountered Jim Hofmeister working as the PAT Administrator and heard him mention opportunities to work as a Rules Official.  Being a retired military officer, that sounded like something right up my alley.  Jim (along with Jeff Ellison and Molly Cooper) has mentored me through the process.  Just like a pilot’s license, the title Rules Official is a “license to learn” and I find that a rewarding challenge.