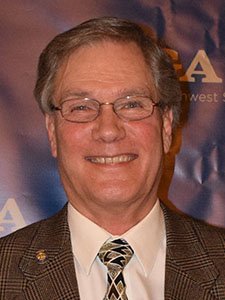 This month we interview Jim Hofmeister, who was named the recipient of the 2018 Perry Williams Award for his service to the Section’s Rules of Golf Committee. Hofmeister, who also serves on the National PGA Rules Committee, is a frequent Rules Official for Section Championships.

I grew up at Hayden Lake Country Club where my dad was the Head Professional for 19 years. After I graduated from college, I got a job as a safety engineer for an insurance company in Spokane, WA. I was transferred to Los Angeles and after 6 months my dad accepted the job at Avondale Golf & Tennis Club. He asked me to come and work with him. Being totally tired of LA, I accepted. We were there for 8 years. Then I got involved with Henry-Griffitts, Inc. where I worked for 28 years starting as an independent club fitter, developing the education program, heading up the R&D department, and ending up being President of the company for 8 years.

How did you get into being a rules official?

Blame it on Jeff Ellison! I had done some rules officiating at a PGA Tour Regional Qualifier at West Delta (now Heron Lakes) and at the Fred Meyer Challenge (Peter’s Party) at Portland Golf Club. Then the PGA Championship was scheduled at Sahalee CC and Jeff told me we didn’t have any PNW members on the National Rules Committee and maybe I should apply. Long story short, I kept at it until they couldn’t turn me down anymore. A great story over a couple of beers, if anyone is interested!

Can you tell us about a favorite time being a rules official?

I think working for the Section is most rewarding. Working for the National gave me a chance to see a lot of great golf courses over the last 20 years. Meeting and interacting with other Rules Committee members and the PGA staffs is very memorable. Some really good people.

Who is your favorite golfer?

I have three, actually. Fred Couples, Mark O’Meara, and Ben Crenshaw. All gentlemen to the core.