“I’m going to pass a law that no one can ask me my golf score” – Dwight D. Eisenhower

The frenzy surrounding a US Presidential election cycle often causes investors’ concern about how their portfolios will fare under a Republican or Democratic administration.  Perceptions, including beliefs about which political party will be better for investors, may overshadow their investment strategies.  But a long-term look at the performance of the S&P 500 index can help investors stay on course.  Here are some reasons to stay the course during the next election cycle.

The president is one of many factors that influence the market and other influences may be stronger.  Macroeconomic (macro) factors, such as interest rates, inflation, economic outlooks, changes in policies, and wars, may have more impact than who resides in the White House.

Profits are important.  Yes, politics and policies can impact the stock market, but business profitability is a strong gauge that should not be ignored.  Increased demand for goods and services boosts company profits and, ultimately, stock prices.  Look to profitability to foreshadow what’s to come in the market.

The US Federal Reserve (The Fed) controls interest rates.  Interest rates are another key underlying factor, so watching what the Fed does will provide important information.  When the Fed lowers rates, it makes it easier for companies to borrow and expand, which may help boost stock prices in the long run.  Keep in mind that the other side of the coin is that Congress has slashed regulations and passed a meaningful tax cuts act which will keep the economy free to expand over the next couple of years.  In other words, the Fed and Congress have both added to an expanding economy by getting out of the way in a capitalistic economy.

Innovation has influence.  Researchers found that the tech giant, Apple, was more of a force in the market than the White House.  Apple’s products stimulated the US economy with 2 million jobs and we consider it a utility value stock rather than a technology growth stock.  It’s “app economy” alone has led to the creation of 1.5 million US jobs and earnings of $16 billion for US developers.  Wow !

As with most things in life, past performance in the market when a particular political party is in power does not mean the same results will occur the next time that party is at the helm.  In fact, this is one of the most common misconceptions about politics and the market.  Stocks have done well in the long term with a mix of Democratic and Republican presidents (see chart).  Look how much a $10,000 investment makes you staring when Vietnam was going on, the Kennedy assassination, and the corruption of LB Johnson and Richard Nixon were taking place.  Our advice is to take ownership of your own financial future and save aggressively with a financial advisor helping you make prudent decisions with your money.  This is only a 60-year snapshot! 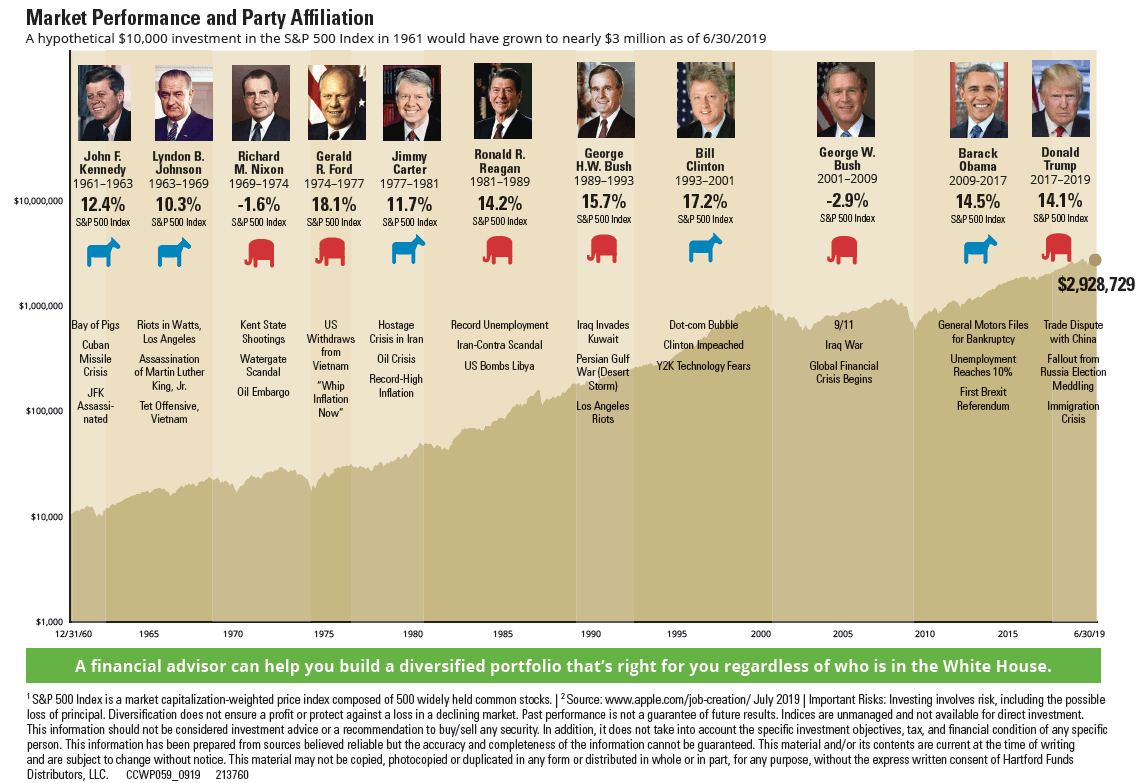 Election cycles, especially recent ones, are fraught with misperceptions, personal biases, and bad information.  Dire predictions that a candidate’s policies will negatively impact a particular sector often prove to be wrong.

Lastly, decisions made during election cycles can be driven by emotion rather than facts.  Your financial advisor can help you ignore the noise and make decisions that align with your financial goals so you’re better positioned for long-term success.

Certified Financial Planner Board of Standards Inc. owns the certification marks CFP®, CERTIFIED FINANCIAL PLANNER™, CFP® (with plaque design) and CFP® (with flame design) in the U.S., which it awards to individuals who successfully complete CFP Board’s initial and ongoing certification requirements.”