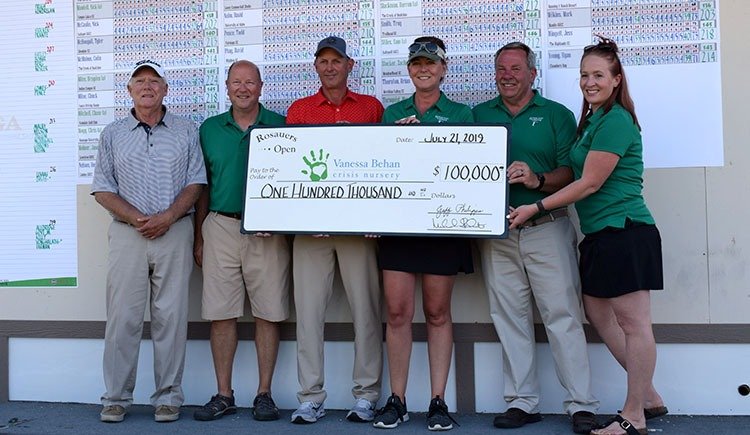 The sponsor team of Rosauers #3 led by PGA Professional Nick McCaslin tied for first in the Thursday Franz Bakery Pro-Am with amateurs Mike Shirts, Jeff Glover, Tim Timpani and Sam Klein with the sponsor team from Rosauers #4 led by PGA Professional Colin McMahon of The Creek at Qualchan and amateurs Scott Stephens, Ken Groh, Bob Fah and Glen Stocking after posting a score of 27 under par 117.

The Franz Bakery Pro-Am takes place both Wednesday and Thursday, followed by the Rosauers Open Invitational which is a 54-hole stroke play championship.   The second round will be followed by a cut and repairing of the top 65 professionals and ties plus all amateurs in that range.

The official charity of the Rosauers Open Invitational is Vanessa Behan Crisis Nursery. Proceeds from the Rosauers Open Invitational will benefit the Vanessa Behan Crisis Nursery, Spokane’s safe haven for children at risk of abuse and neglect.  The Nursery also provides counseling, education, and referrals for parents of young children.  The event raised $100,000 for the charity with over $3,000,000 raised throughout the 32 years. To learn more about the charity or to make a donation, please go to http://www.vanessabehan.org

Indian Canyon hosted the 1941 and 1984 Public Links Championships.  When Bill Welch was victorious in 1941, he concluded “After I played Indian Canyon, I never wanted to go back to Texas again.  I never saw a golf course that beautiful in my whole life… I did return to Texas, but only to pack my bags and move to Spokane.”