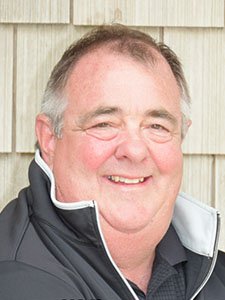 Hometown:  Born in Colorado and raised in the small community of Ojai, CA.

PGA Member Since: A PGA member since 2014

Jim developed the passion for the game while working at the golf course in Ojai, CA and playing golf with his father.

“I played golf 24/7 until I went to college at Arizona State University,” he said, where he received a degree in psychology. After college, he entered the restaurant business. 20 years later, he decided to change careers and get back into golf. He landed a job with Ken Morton at Haggin Oaks GC in Sacramento, CA, where he worked and taught golf for 10 years. He then moved to Coeur d’Alene, ID, and is now in his 11th season at Coeur d’ Alene GC.

At Coeur d’ Alene GC, Jim is known for being a great golf professional who is always willing to help. Each year he donates his time for “Clubs for Kids”. The Inland Empire Chapter, with the support of the Pacific Northwest Section , sponsors a booth at the Spokane Golf Show, where golf clubs are given to every kid who comes to the show. Jim coordinates donations of old golf clubs from local professionals and facilities, cuts them down to three or four different lengths and then re-grips them.

“We cut down 425 clubs this year and gave away 415. The excitement in the kiddos’ faces when we give them a club is a reward itself. And how many pick up the game and continue to play because of their first club? It’s hard to measure but we are encouraged,” Jim said of the program.

“I love working with juniors, using golf as way to slide in life lessons. I also have a passion with working with beginners helping them discover the fun of the game,” Jim added.

The best part? “When I see people I have worked with enjoy the game and bring others to share in the excitement.”