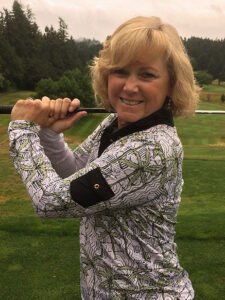 Hometown:  Born in Baltimore, MD. Currently has lived in Eugene, OR for the past 10 years.

Debby King was first inspired to get into golf by her father. Then it was Bob Toski who, along with the PGA and LPGA, taught her to be a teacher. Recently, King received a Yamaha Player Development Grant for her Glow Golf Event at Laurelwood Muni GC. We asked her to share some highlights about this event.

“Our Glow Golf Events were so exciting, I wanted to play in it myself instead of running it! I am on a quest to be the best Glow Golf Event in the county,” said King, describing some of the lighted equipment that goes into the event, including lighted flagsticks, glowing tee markers and yardage markers, and blasters that shoot out a wide angle glow of each putting green. This is not just your typical ‘glow-stick’ event that is difficult to see in the dark, but an extravaganza of light and fun.

“The grant was extremely instrumental in getting this tournament off the ground. The initial expense of such elaborate equipment makes it difficult to put on a ‘one-of-a-kind’ event. Now that we have most everything we need, the tournament has a consistent profit each time it is hosted,” said King.

The best part? “All we have to do from now on is replace batteries from time to time. The Glow Golf equipment is reusable time and time again; nothing to throw away!”

The grant sure is nice, but if Debby King had unlimited funds for player development, then what might she do? “I would like to light up my driving range with Glow Targets similar to Top Golf. It would be a great hit in this little old town of Eugene if we had a mini- Top Golf type of practice range.”

Sounds like fun. Thank you, Debby! You can read her best practices report here if you’d like to try a Glow Golf Event of your own. Make sure to look out for the 2018 Yamaha Player Development grants early next year!