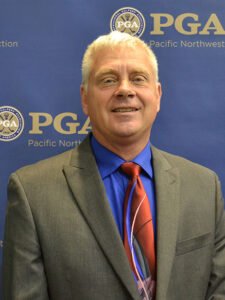 Hometown:  Born and raised in Clinton, Connecticut. Moved to Oregon in 1996.

Dana Londin’s grandfather started teaching him golf around the age of 7. Now he’s created a golf course just for young golfers at La Grande CC in La Grande, Oregon. Conceived and constructed by Head Professional Dana Londin, Director of Instruction Stuart Smart, and Greens Superintendent Brent Austin, the idea came about to create a kid-sized course that would be a stress-free space for children to enjoy golf.

“We developed this entire idea for and about kids. It is their course and parents or grandparents play as guests of kids,” said Londin. This is special because often when children play with their parents on the golf course, they get very stressed when told to hurry up and that people are waiting behind them.

The kid-sized course consists of four holes and is 305 yards long – but plays longer, due to the fact that the kids play with birdie balls, which are easier to hit than regular golf balls and don’t fly as far. Hole 3 is the longest at 100 yards, “the same length as a football field. Telling the kids this adds a wow factor for them,” said Londin.

Tee markers teach kids where to place their ball, cuts between rough and fairway give an idea of how to play the ball on different areas, and putting greens approximate the real thing. Flag sticks are 4.5 feet tall, cups are 8 inches around to make it easier to get the ball in the hole.

Lodin funded his project in part with a Yamaha Player Development Grant. No huge renovations were needed – he took a piece of the golf course that nobody used and mowed it down.

“Everybody has a half-acre of acre of space on your golf course that you can do something with. You just have to be creative,” Londin insists.

He challenges other PGA Professionals to try their own creative ideas. “If you are thinking outside the box, I dare you to try it. What’s the worst that can happen you? Your idea will grow and your members will embrace your thinking and help you improve on it.”

Thank you, Dana Londin! Make sure to look out for the 2018 Yamaha Player Development grants early next year!

View the LaGradeAlive.TV story about this here