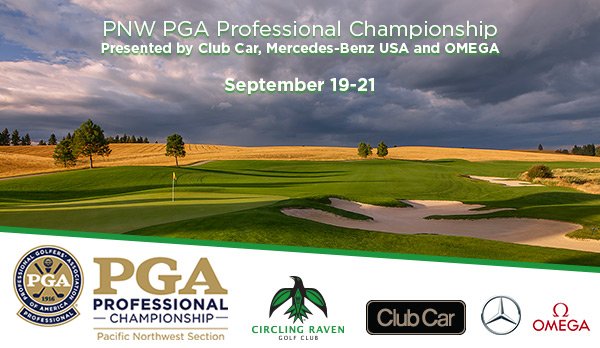 National is now accepting entries for the PNW PGA Professional Championship at Circling Raven GC on September 19-21, 2017. The entry deadline is Wednesday, September 6th at 11:59 PM. You may register for this event through PGA of America Membership Services online at www.PGA.org or www.pgatournaments.com or by phone (800) 474-2776.

We use our standard major championship entry fee ($320 plus $25 for skins) for our PGA Professional Championship. This year with Circling Raven GC being a cart facility, we added in a cart fee into the entry to get to our $375 total.  By going with our normal entry fee, we are able to add an additional $23,500 to the purse and we will pay up to 50% of the field.

The purses for the PNW PGA Section Championship have been amazing over the years! Thanks to using our normal entry fee we’ve averaged well over $70,000 the last five years and with your participation we expect this year to easily top that mark.

Get Ready to Play

This championship confers the title of “The Pacific Northwest Section Champion”. It is the most important and elite PNW PGA tournament of the season.

You read it right! We are excited to have the opportunity once again to return to the west coast for the second year in a row! You don’t want to miss out on your chance to advance and play in your own back yard.

The Return to Circling Raven GC

The PNW PGA Professional Championship will be held at our spectacular Circling Raven GC in Worley, ID on September 19-21, 2017. Host PGA Professionals Tom Davidson and Mark Nelson and his staff are excited to host this year’s championship.

This beautifully designed course was built in 2003 by architect Gene Bates. It flows through 620 visually stunning and inspirational acres adjoining the Coeur d’ Alene National Forest. Wildlife is abundant, including elk, deer, moose and an occasional black bear. Circling Raven has consistently been rated as one of the top Resort courses in the country. Golf Digest and Golf Magazine Golf World have rated it in their Top 100.

Only open to Section Professionals, this event draws the strongest field of PGA members in the Northwest.  Last year, PGA Professional Corey Prugh of Manito G&CC won the Pacific Northwest PGA Professional Championship in a one-hole playoff against defending Champion Tim Feenstra of Broadmoor GC.  Prugh made a birdie on the first extra hole for the title.

CLICK HERE for the PNW PGA Professional Championship flyer. Show it to your bosses to remind them that you need time off, or give a copy to your fellow professionals to encourage them to compete.