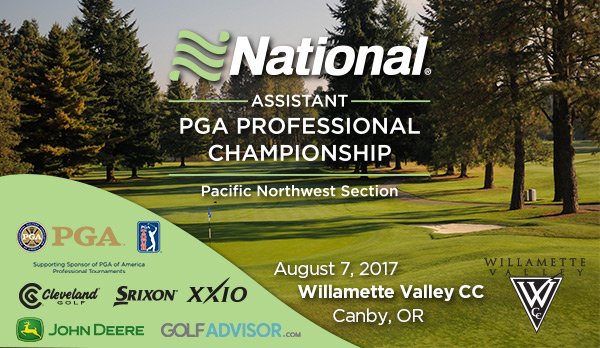 Assistants – plan on entering! Bosses, give your Assistants time off to play in their Championship!

National is now accepting entries for our National Car Rental PNW Assistant PGA Professional Championship supported by Cleveland Golf, Srixon, XXIO, John Deere and Golf Advisor at Willamette Valley CC on Monday, August 7. We will play 36 holes. The entry deadline is Wednesday, July 26 at 11:59 PM. Please pay close attention to the entry deadline for this event. There is no longer a late entry option to this championship. The PGA of America recently changed to the entry process to a 5-year calculation which determined spots we are playing for and purse calculations.

You may register for this event through PGA of America Membership services at 800-474-2776, www.pga.org or at www.pgatounaments.com.

This year’s Assistant Championship marks the 41st Anniversary as a National event but the PNW Section has been conducting the event since Fred Pelzer donated the trophy in 1965.

The National Championship tradition began in 1976 to recognize the role of the PGA Assistant Professional and how important he or she may be in the success of a golf facility as well as our entire Association. They represent more than 10,000 men and women assistant professionals and registered apprentices nationwide.

Willamette Valley Country Club proudly boasts one of the most highly respected 18-hole championship golf courses in the Pacific Northwest. Shirley Stone designed the original layout of this course, further developed by Bill Robinson and Craig Schreiner to become today’s 7,200-yard masterpiece and “hidden gem” of the Willamette Valley. The sixteenth hole has become the signature hole of Willamette Valley Country Club. It is a short but difficult dog-leg left par 4 which requires an accurate approach shot over the pond to a large yet drastically undulating three-tier green. PGA Head Professional John Grothe is excited to host.