In February 2017, the PNWPGA Section hosted two Player Development Section Workshops. Each of these two day workshops were all about understanding and more deeply engaging with our customers (or members) based on their why for playing golf (not the reason the facility or club believed they played golf.) 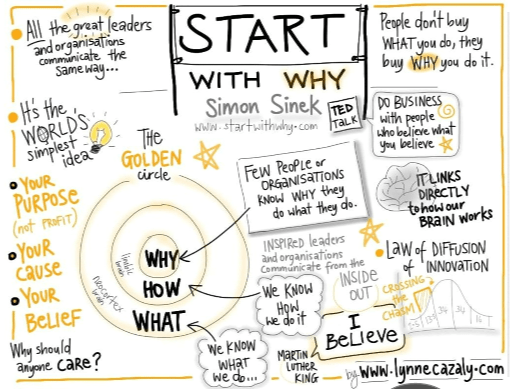 Of course, to understand this, we need the context of “Starting With Why.” (For a great context, watch  Simon Sinek’s Ted Talk, “Start With Why” and review the graphic summary of Simon’s video by Lynne Cazaly above.)

SPECIFIC TO GOLF: The “why” has little to do with the “whats” we so often focus on in the golf industry. These “whats” include the price, the service, the course conditions and the ever popular “nothing goes wrong.” These “whats” do in fact matter, but they have very little effect on the reasons why people play MORE GOLF or choose to be loyal to one facility over another. The reasons are more about their why. Statistically speaking, from a survey of more than 6k golfers (taken on the first tee) the overwhelming reasons why golfers (of all abilities, backgrounds and ages) play MORE GOLF and choose to be loyal to a facility are these:

There is great news here. I see one common denominator in each of these “why reasons.” They each create a significant opportunity for a PGA professional to be an “engagement creator” and “difference maker” at the facility where they are employed. Truly, it’s what excites me and interests me every day in my role serving PGA professionals, because it is this opportunity that directly impacts the employment, specifically compensation and stability.

APPLYING THE WHY EFFECTIVELY: Back to the Section Workshops, after setting the context for the why, we worked on the discovery of engagement concepts at the local facility level. These concepts were developed and designed to deliver on the “customer’s why” based on several factors including their generational codes, their playing ability, their family situation, etc. Attendees learned interactively how to build their own awareness to build offerings/concepts that are fit to the why of a particular segment of their customer (membership) base.

Based on the highly positive feedback from participants in February’s workshops, we are working on bringing more of these Player Development Section Workshops this coming Fall 2017 and Spring 2018 to the PNWPGA Section.

In the meantime, let’s change gears and look proactively at the 2017 golf season (when it finally arrives) let me challenge you…no, encourage you to challenge yourself (your team) to think differently about engagement like these professionals did (as examples) to make a meaningful difference at their facilities.

“In 2015, we started off our season with a Masters Par 3 Contest. We scheduled the same day as the actual version that takes place at Augusta National and used our back 9 to create nine unique par 3s from creative angles. The results were awesome. Our first year, we had 46 players participate and it really helped kick off the season…one member said it was the best thing we’ve ever done in his entire experience…I don’t know if that is true, but it was a success.” Meridian Valley repeated the plan in 2016 with similar success and has it scheduled for April 5th again this year. Key details about this concept:

THE WHY QUESTION: What can we learn from this story? A highly social (even for your best players) event like this is really the draw or the ante that brings out everyone. This event is a place where a high handicapper can “hang” with the better players because the holes are short and the stakes aren’t high. This event, placed as the kickoff could be the one event that helps get new members engaged, helps them meet new people and should lead to greater spend in every outlet of the club for the rest of the current golf season.

“Before Colwood, I got a great opportunity to teach full-time. I quickly realized this facility was missing a culture of game improvement. Sure, people practiced there, but they didn’t learn there and certainly not socially. As a way of getting visibility for myself, I tried this group concept out and it grew. Then, when I got the similar opportunity with Colwood, I tried it again. In 2015 and 2016, the results were even better.”

Key details about this concept:

Thinking differently at the facility before Colwood actually led to Dennis’ opportunity to move to Colwood (CGC). It also proved the value of the concept and gave him the confidence to do it right away once at CGC. This group has led to more rounds of golf for CGC, more range revenue and increased sales in the food and beverage department at Colwood.

THE WHY QUESTION: What can we learn from this story? Hey pro, it’s okay if it’s not about you directly. Let it be about what you (your team) can do to create “socially rich communities” for small groups of people based on their why.

“Once I got to Bellingham GCC (BGCC) it became clear to me there was an opportunity for a full-time teaching professional, so I worked with Monte to help me build the strategic vision to make that happen. I also realized that although I wasn’t wired for that role, there was still a need for creative engagement concepts aimed at activating our membership. One of the concepts Monte shared with me and I adapted for BGCC was the Couples Chip n Sip.”  Key details about this concept:

THE WHY QUESTION: What can we learn from this story? It’s about more than course conditions, setup or similar. It is about fun, creating social connections and delivering it in a creative way that alters the challenge for the “regular” but doesn’t overwhelm the recreational and social golfer.

I’d like to thank these professionals and many like them, who have chosen to think differently about their operation. Doing so helped them see opportunities they’d previously not seen or not taken full advantage of. If you have a story about an engagement concept that can inspire other PGA professionals, please take the time to tell your story to me. As I have said before, it’s my hope to assist you in maximizing these opportunities by helping you in areas related to your professional development, your awareness, etc. Please let me know how I can help you (and your facility) in 2017 to do just that.