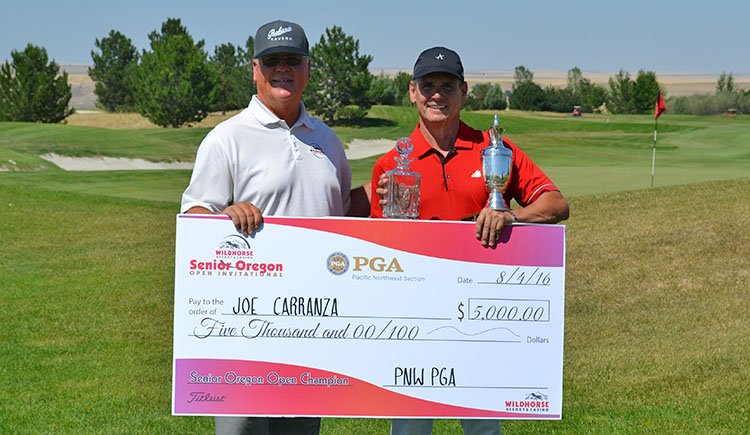 2016 marked the 14th year in a row in which Wildhorse Resort & Casino has hosted the Senior Oregon Open Invitational. Wildhorse is a 7,000 yard, par 72 course laid out over the rolling hills of the Umatilla Indian Reservation in Pendleton, OR.

The three-day tournament included a field of 224 professionals and amateurs competing to be crowned the Senior Oregon Open Invitational champion. Along with the individual gross competition were included a net division, super senior division and two-day team contest. The team competition paired one professional with three amateurs in a best 2 of 4, 1 net-1 gross format.

PGA Professional Joe Carranza of Aldarra Golf Club entered the third round trailing by 2 strokes to fellow PGA Professional and 2014 Champion Todd Erwin (Tacoma Golf Center) and amateur Brad Karns (Royal Oaks CC). After grinding through the front nine, Carranza made his move on the early part of the back nine. A birdie on 10, birdie on 11, par on 12, and eagle on 13 vaulted him to the lead; a lead he would not relinquish.

“I probably made 10 putts from 4 to 8 feet for par. My lag putting on those greens was not very good, so all of those putts helped keep the rounds going,” said Carranza.

This is his first PNW Section Major win and he believes it was a team effort, giving a “shout out to Aldarra Golf Club and all its members for all of their support for me over the past 12 years, as well as a shout out to my good friend Lonnie from east side gym in Redmond. Lonnie has been a huge help with all my rehabilitation from my back surgery in January of 2015.”

The team of PGA Professional Mike DeLong (Coeur d’ Alene Resort GC) and amateurs Bob Christensen, Joe Stumph and Mike Kirk took the team victory with a two day total of 259, an astounding 29-under par for the 36-hole competition.

Amateur Bob Christensen (Coeur d’ Alene Resort GC) was victorious in the net division with a three day total of 201, which put him 15 strokes better in relation to par.

The super senior division is made up of professionals over the age of 63, 14 of which fit the criteria. PGA Professional David Bobillot (Eaglemont GC) stood atop the division at the end of the 36-hole competition.

We would like to thank Wildhorse Resort and Casino for the awesome hospitality accommodations and beautiful golf course. Another thank you goes out to Head PGA Professional Mike Hegarty and his staff for their help in the running of this successful event. We look forward to returning in 2017 to Wildhorse Resort and Casino for the playing of the 22nd Senior Oregon Open Invitational.

To view past champions of the Senior Oregon Open Invitational, CLICK HERE 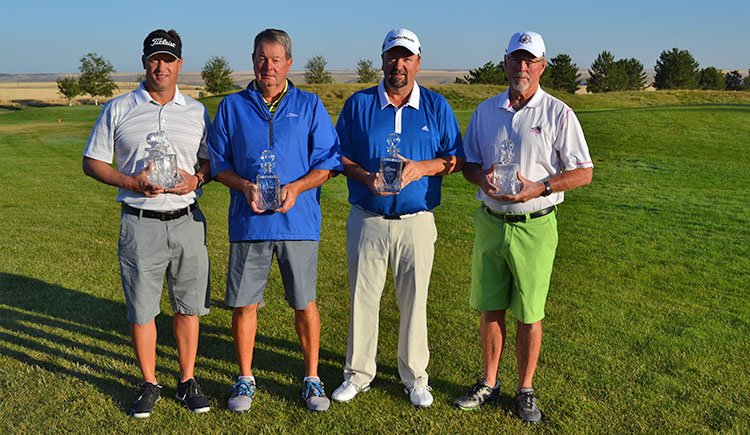