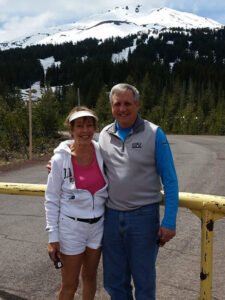 Ed Paine and his wife, Tonnea

Ed Paine began his golf career as an assistant under Del Herring at Three Lakes GC in Malaga, WA from 1977 to 1979. He was then out of the golf business, except for club repair and custom clubs, from 1980 to 1990. Then in 1990, Del Herring, who was now General Manager or Kahler Glen GC, asked Paine to help open and run their 9-hole course. Paine turned professional again and worked as the head professional at Kahler Glen GC until 1998. In 1999, he moved to Leavenworth GC and worked with Jim Van Tuyl. Late in 2007, he felt a change was in order.

“My wife, Tonnea, and I opened The Golfers Edge our indoor golf facility. Mr. Ellison and the PGA came over to inspect us and gave us their approval, and off we went… the scariest moment of my life,” said Paine.

The Golder’s Edge is now nearing its ninth year in business. No one expected the success that the hole-in-the-wall golf facility would come to have.

“In my last year at the Leavenworth Golf Club I taught 150 lessons. In the 8 plus years we have owned this facility, we have been averaging a little over 650 each year. Never in my wildest dreams did I expect that.”

Ed Paine has been extremely active in the Pacific Northwest Section PGA, especially in his chapter. He has won an award nearly every year at the chapter level for the last decade or so,  and nearly every kind of award including the: Player Development Award, Merchandiser of the Year – Public, Bill Strausbaugh Award, Senior Player of the Year and Teacher of the Year. He was a Central Washington Chapter board member from 1999-2004 and 2009-2012. He has also taught seminars in “The Art of Club Repair,” and “Teaching and Fitting Golf Clubs with Technology.”

This year, Paine won a Youth Player Development Grant from the Section and also a Player Development Grant from the Central Washington Chapter. This has allowed him “to further seek out people who otherwise would pass on this great game.” Paine’s approach is to hand a person, no matter the age, a golf club fitted to them, and spend time with them on the simulator showing how to use it.

Once they learn the basics of technique, it’s important to show people how golf fits into their lives.

“You try to pair them with their family, friends or people at work to show them how the game can create new opportunities in their life going forward.  My desire and goal has always been to get more people involved in the game of golf,” said Paine.

Not every new student becomes a golfer this way, but Paine has still seen many benefits.

“The gratitude they show brings a smile to my face. In the last year and a half I have probably started 20 to 25 people in playing the game and have probably brought back another 10 to the game.”

When asked about his plans for the future, Paine responded, “I will remain with the PGA and try to help more where I can. When I do not have the day-to-day operation anymore, I still want to teach and do club repair.”

Thank you, Ed Paine, for growing the game in Central Washington and the Pacific Northwest Section!