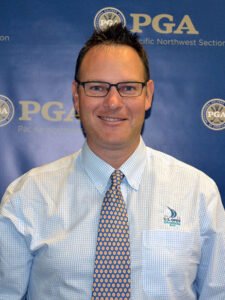 At age 12, Brent Zepp told his grandmother that he was going to be a golf professional. At age 14, he started working at Meridian Greens in Puyallup, WA. By age 16, he was working in the golf shop.

Zepp graduated from the San Diego Golf Academy. He began his career is 1998 at Meriwood GC in Lacey, WA, becoming a PGA apprentice soon after.

“Now as the Head Professional at Chambers Bay, I am truly having the time of my life… promoting the great game of golf in great ways every day!”

The biggest promotion so far has, of course, been the US Open. We asked Zepp to tell us a little bit about what it was like hosting the largest professional golf event ever in the Northwest.

“I tell people that hosting the US Open was a dream,” said Zepp. It was a dream that took seven years from beginning to end. Simply having the title of a “future host site” was the first experience that Brent got to add to conversations and guest experiences at Chambers Bay. Then there were the many planning sessions with the USGA.

“It was always fun to sit at dinner with Mike Davis and others, and hear many great stories from their perspective inside the ropes.”

As the event drew closer, Zepp’s job changed dramatically. On May 25, 2015, the public course closed for final preparations, transforming into a major venue that would host 40,000 spectators per day during the championship.

There were also the television appearances.

“One of the great highlights was being on with q-13 local fox affiliate live for six shows throughout the week talking all things US Open,” said Zepp.

It was this promotion of Chambers Bay and the game of golf that exemplified Zepp’s leadership in the US Open, earning him the Western Washington Chapter Golf Professional of the Year Award.

We asked Zepp what his leadership goals are for the future.

“I plan on continuing mentoring the staff at Chambers Bay and developing our team into the best service team there is in golf,” he replied.

“Brent has been a great mentor and friend. His direction has helped make me a confident PGA professional,” noted Ryan Young, Director of Instruction at Chambers Bay.

“I also plan to continue building relationships in the golf industry and the PGA,” added Zepp, who plans to become more involved on the Section level and eventually at the PGA National level.

We know we can expect great things of Brent Zepp in the future!