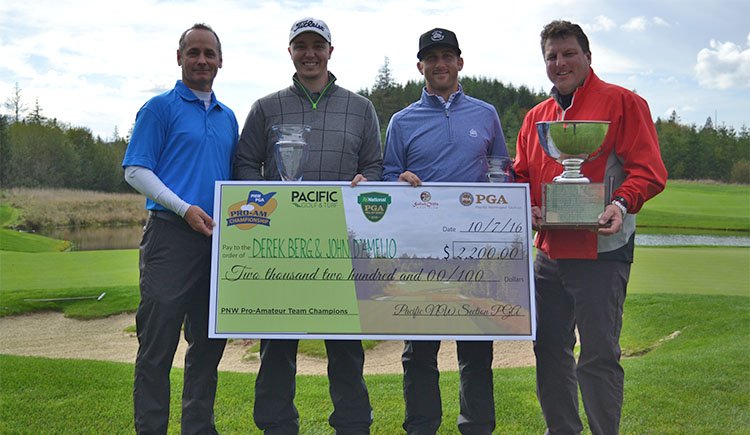 Sponsored by National Car Rental, the Official Rental Car of The PGA of America, the event is one of nearly 100 new and existing amateur tournaments across the 41 PGA of America Sections nationwide being linked together to form the Pro-Am Series.  National created the tournaments to help further the PGA of America’s mission to grow interest and participation in the game of golf at local levels.  The Series will run February through October 2016.

The Pacific Northwest Professional-Amateur Championship started when a young head professional named John Junor and his amateur partner won back to back titles at the magnificent Seattle Golf Club in 1924 and 1926 (no championship in 1925).  Professional Walter Pursey and amateur Harry Givan topped Junor in the late 30’s with a three-peat victory at Seattle GC twice and Alderwood GC once.  As the years went on, many great players etched their names into the record books as champions of this event.  Long time professional Don Bies and his partners have seen numerous championships winning three of them in 1961 at Glendale CC, 1964 at Seattle GC, and in 1966 at Yakima CC.  Other greats such as Bunny Mason (1963) and Jerry Mowlds (1969, 1978) have all had their share of the title.

Salish Cliffs GC is a Gene Bates designed golf course which opened in September of 2011.  Owned by the Squaxin Island Tribe and operated by Little Creek Casino Resort, the golf course covers over 300 acres through the Kamilche Valley.

Rich, lush forestry encircles 16 of the 18 holes that feature dramatic views of the valley and smooth elevation changes of over 600 feet.  The playing surfaces consist of lush bent grass on the tees, fairways and greens.  The roughs are pure rye grass with a border of native fescue outside.  Several wetlands are located within the courses design and both the front and back nine finish by sharing a massive double-green.