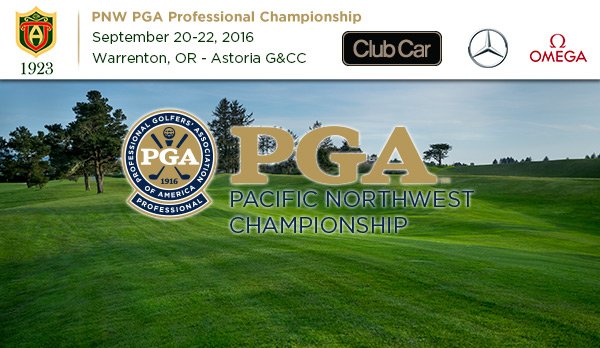 National is now accepting entries for the PNW PGA Professional Championship at Astoria G&CC on September 20-22, 2016. The entry deadline is Wednesday, September 7 at 11:59 PM. You may register for this event through PGA of America Membership services at 800-474-2776, www.pga.org or www.pgatournaments.com. Please pay attention to the 11:59 PM entry deadline for this event!

This championship confers the title of “The Pacific Northwest Section Champion”. It is the most important and elite PNW PGA tournament of the season.

Astoria Golf and Country Club began in 1923 and is considered one of the Northwest’s premier private golf clubs. The unforgettable and challenging 18-hole golf course, built on top of ancient sand dunes near the Pacific Ocean, is one of Oregon’s hidden gems and host to the annual Oregon Coast Invitational Tournament. Astoria’s offers a full service golf shop, newly redesigned clubhouse with men’s and ladies’ locker rooms, restaurant and banquet facilities, and a 13 acre practice facility. With its rich history and one of a kind layout, Astoria truly is a “St. Andrews of the Pacific.”

Only open to Section Professionals, this event draws the strongest field of PGA members in the Northwest. Last year, PGA Professional Tim Feenstra of Broadmoor GC came from five strokes behind PGA Professional Brian Thornton of Meridian Valley CC to win his third Pacific Northwest PGA Professional Championship.  Feenstra had six birdies on his way to his 6-under par 66 to force Thornton into a playoff.  On the first hole of the playoff, Feenstra birdied to win after Thornton’s birdie putt narrowly missed.

Feenstra had previously won this event back in 2011 at Illahe Hills CC and 2013 at Meadow Springs CC.

Get Ready to Play

CLICK HERE for the PNW PGA Professional Championship flyer. Show it to your bosses to remind them that you need time off, or give a copy to your fellow professionals to encourage them to compete.

And while you are in town to enjoy this amazing course and tournament, you may want to enjoy some of the fun, unique things to do around Astoria.

Shallon Winery has been called the “Willy Wonka of Wineries” for the truly unique tasting experience, colorful historic building, and popular chocolate and fruit wines. http://www.shallon.com/

Fort George Brewery offers over 40 varieties of beer to try, in another historic Astoria building.
http://webpages.charter.net/astoriatrolley/