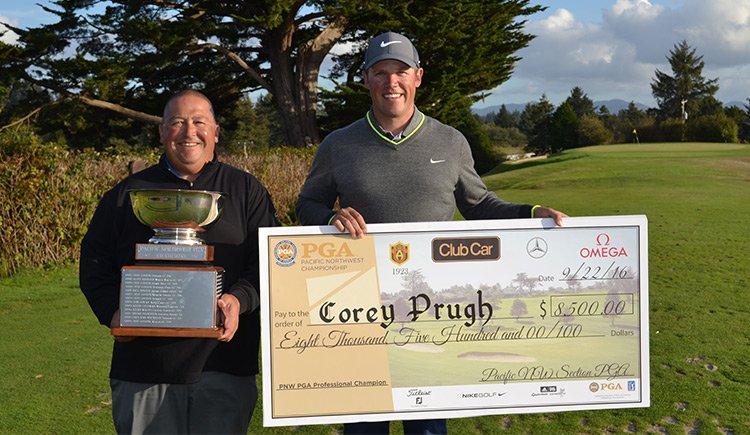 PGA Professional Corey Prugh of Manito G&CC won the Pacific Northwest PGA Professional Championship in a one-hole playoff against defending Champion Tim Feenstra of Broadmoor GC.  Prugh made a birdie on the first extra hole for the title and $8,500 first place check.

The PNW PGA Professional Championship is a 54-hole championship and serves as a qualifier to advance directly to the PGA Professional Championship, June 18-21, 2017 at Sunriver Resort, Sunriver, Oregon.  In addition to Prugh and Feenstra, Scott Erdmann of Oswego Lake CC, Russell Grove of College Golf Camps Of America LLC, Brent Murray of Oswego Lake CC, Ryan Malby of Iron Horse GC, and Bryan Tunstill of Columbia Edgewater CC all earned spots to represent the Section next June.

Additionally, the low 20 scores at the 50th PGA Professional Championship next June will earn a place in the 99th PGA Championship, August 10-13, 2017 at Quail Hollow Club, Charlotte, North Carolina.

Congratulations to Christopher Smith from Pumpkin Ridge GC for his Hole-In-One on #10 on Wednesday.

After the conclusion of this event, the Hudson Cup teams were decided. See which of your friends made these coveted teams:

CLICK HERE – to view past champions of the PNW PGA Professional Championship.

Astoria Golf and Country Club began in 1923 and is considered one of the Northwest’s premier private golf clubs. The unforgettable and challenging 18-hole golf course, built on top of ancient sand dunes near the Pacific Ocean, is one of Oregon’s hidden gems and host to the annual Oregon Coast Invitational Tournament. Astoria’s offers a full service golf shop, newly redesigned clubhouse with men’s and ladies’ locker rooms, restaurant and banquet facilities, and a 13 acre practice facility. With its rich history and one of a kind layout, Astoria truly is a “St. Andrews of the Pacific.”