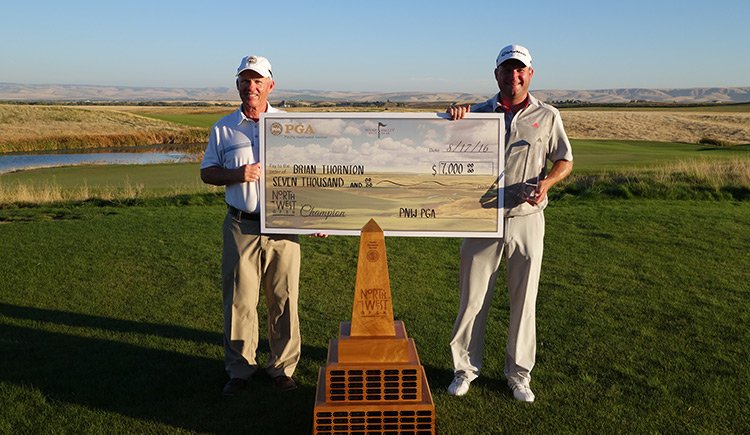 Day one began as 163 professionals and amateurs teed it up with one common goal: to become champion. Thornton started the tournament with a solid 69, a 3-under par round that consisted of four birdies and a lone bogey. This placed him firmly in the top ten and three shots behind the leader. On day two, he made a big move by firing an immaculate 62. He went out in 32 and, unlike the first day—where he came in with nine straight pars—he came in with six birdies and a back nine of 30. This gave him a five-stroke lead going into the last day of play.

“I was going to play it like match play a little at first. The start I had made me realize that it was going to take more than that, and I reset my mindset to go out and play with offense,” Thornton said of his strategy on the final round. The start he is referring to included a bogey on 1 and 5, placing him 2-over par after five holes. Thornton would right the ship with birdies on 6, 7 and 9 to finish his front at 1-under par.

Going into the final nine holes, Thornton was challenged by a late charge from amateur Andrew Whalen (Lakeview G&CC), who fired a final round 65. However, nine holes and three birdies later, Thornton finished the tournament atop the leaderboard, three strokes better than his nearest competitor.

Thornton attributes his win to a well-executed golf game, tough mental mindset and help from a loving caddy.

“I played very well off the tee for the most part. It allowed me to be aggressive in shot-making, coming into the greens. As long as you have a good shot to hit your approach, you can do well. I did putt pretty well too. I only had one three putt the entire week, which is special. I would like to say that having my wife with me meant a ton! A very good ‘caddy’ she is!”

2016 marked the first repeat champion in the history of this event at this site. Brian Thornton previously won the Northwest Open Invitational at Wine Valley in 2010. Thornton’s three round total of 199 tied the 54-hole record set last year by PGA Professional Derek Barron.

We would like to thank Wine Valley GC and John Thorsnes, PGA Director of Golf, for hosting. We are excited to announce Wine Valley just signed a three year contract to continue hosting the Northwest Open Invitational.

The early years were dominated by Seattle Golf Club’s Robert Johnstone (who won 8 of the first 10 events) and “Long Jim” Barnes. Barnes, the professional at Tacoma C&GC from 1911 – 1915, won the first two PGA Championships (1916, 1919) in addition to the 1921 U.S. Open and the 1925 British Open! Spokane’s Marvin “Bud” Ward captured six championships over a 22 year span, five as an amateur and his last as a professional.  Bud was also a National Amateur champion and may have won a few more but for the lack of championships during WWII. To view past champions of the Northwest Open Invitational, CLICK HERE.