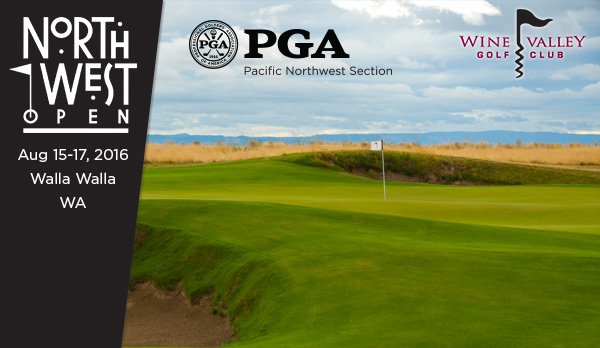 Entries are available for the Northwest Open Invitational at Wine Valley GC on August 15-17th. PGA Director of Golf John Thorsnes is excited to host this year and invites you to take part of this historic championship. The entry deadline is Wednesday, August 3rd.

History of the Northwest Open Invitational

The early years were dominated by Seattle Golf Club’s Robert Johnstone (who won 6 of the first 10 events) and “Long Jim” Barnes. Barnes, the professional at Tacoma C&GC from 1911 – 1915, won the first two PGA Championships (1916, 1919) in addition to the 1921 U.S. Open and the 1925 British Open! Spokane’s Marvin “Bud” Ward captured six championships over a 22 year span, five as an amateur and his last as a professional. Bud was also a National Amateur champion and may have won a few more but for the lack of championships during WWII.

Wine Valley Golf Club, which opened in April of 2009, has been rated 5th on Golfweek’s Best New Courses. This stunning Dan Hixson design unfolds on a grand scale, playing over rolling hills in the shadow of the Blue Mountains. Wine Valley GC had broad fairways, dramatic bunkers, and bold, undulating putting surfaces.

CLICK HERE for the Northwest Open Invitational flier. We would appreciate it if you would post it at your club or e-mail it to your members. Amateurs with a handicap of 8.0 or less are eligible to enter this championship.

Thanks to a truly unique combination of climate, character, charm and culture, the Walla Walla Valley has become home to one of the finest wine regions in the nation, with more than 100 wineries and 2,800 acres of grapes.

Their wineries and tasting rooms are distributed across four main areas: downtown, the west side, the east side, and south of town, including a handful of wineries across the border in Oregon. Each region has its own distinct feel, yet all combine to make Walla Walla Valley a wine country unmatched by any other. http://www.wallawalla.org/wineries/

Other attractions include the Fort Walla Walla Museum www.fwwm.org/