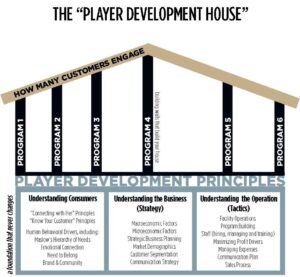 I have also seen well-intentioned PGA professionals (and/or golf club owners) with a massive blind spot. They still believe in the old business formula: great service + great course conditions =success. Yes, service still matters and so do course conditions. But, let’s face it, our customers can get those nearly everywhere.

Thinking “PGA Service” is the key to success is off-base in today’s world. That’s the same as thinking a set of MacGregor MT woods (real wood), Wilson FG-17 irons and a Titleist Pro-Traj will perform as well as any of today’s modern equipment. I started the final round of the Oregon Open at Brasada Ranch this month. One thing I didn’t see was a player teeing it up with that old equipment. Why not? Well, we all know that would be insane.

And yet, there are PGA professionals, owners and board members who still think the business formula that worked before (when the Pro-Traj was still the best ball) is still the right one. That is also insane. To prove that point of view, I’d like to share a story with you.

(Note: Grasslands Country Club is in the “Panhandle of Florida.” It’s a non-equity, blue-collar club. The median household income of the Florida Panhandle is $46,341.)

“Grasslands: It was a golf club that was bought by an owner of a coalmine from Birmingham, Alabama. So he’s a good businessman and thought, ‘I’ll get into the golf industry.’ And he came along and looked at the Club, and thought, ‘Okay, I’m gonna cut this here, cut this here and cut that here, because I need to help this Club balance its books.’

So, they went into their first year under him with three (3) golf professionals. By the end of the first year (we’re going now back to 2009) he actually looked (at his books) and noticed it hadn’t worked out the way he had expected it to (which often happens when successful business people first come to the golf industry.)

So in 2010 (at the end of the season) he looked at his figures (his profit and loss statements) and he went to the (lone) golf professional. This golf professional PREDICTED the conversation (that) was going to happen and said, ‘I know you’re in here to talk to me about cutting my job, but I’ve got a proposition for you.

My proposition is: What I’ll do is work for nothing. If you just let me have the range and I’ll coach (inferred by Ian: give me all of my lessons and let me be a full-time Dir of Player Development and Member Engagement) and you’ll give me a commission on me bringing new members to the Golf Club.’

At the end of that next year (2011) the Birmingham coalminer (ie., the owner) decided, ‘Whoa’ I don’t know why (because no one had ever explained it to him) but there seems to be a (strong) correlation between what the pro was doing and his rounds and his (number of) members and they’d gone up.

Today (fall of 2015) there are seven (7) PGA professional staff at that facility. Because, although no one has ever explained it to him, or told him how to do it. He (the Birmingham coalminer, Club owner) just noticed on his spreadsheets that if he had a (PGA professional) coach focused on bringing in members and creating coaching (eg. member retention and engagement clinics, concepts) his rounds (revenues) and members (count) went up.

And that is all he (the owner) focuses EVERY PGA assistant on. In a very real way, it’s not smart, it’s not clever, it is a very direct (question.) He asks them, ‘How many people have YOU brought to the Club this month, what’s our rounds looking like and what are YOUR numbers on coaching?’ So, this owner is driving his PGA coaches/assistants to drive their coaching revenue up even though he’s not making any money (or very little money from it) because he’s worked out himself, the link between their coaching (Player Development and Member Engagement) activities that saved the Club. That’s the Grasslands story.”

So, what can we learn from this true story of Grasslands Country Club?

The golf industry is not like a coalmine, or most other industries. It’s not an industry where the customer needs what we sell. They have to want it (and they use their discretionary income) to participate. It’s not food, gas or other staples (like energy.)

Question: Are you in the position of the owner/the employer (aka General Manager, Dir of Golf, Head Professional)? If yes, do you have the smarts to see TALENTED, ENGAGING and ENTREPRENEURIAL PGA professionals working for you?

Question: Are you a “cheese-burger pro” who likes it behind the counter (or behind the desk?)

Question: Are you tired of being tasked with being a “counter jockey?”

The focus of the Grasslands owner is on the success of his PGA professionals engagement of his current members (which drives revenues throughout the entire facility) and attraction of new members to the Club.

In conclusion, I hope the story of Grasslands CC has given you a new view on the opportunity that may exist for you, your facility and your future as a PGA golf professional. I hope that you’ll share the Grasslands story with other professionals, your owner, etc. as well. I’m sure there are some learning points in the story I haven’t covered. If you’d like to discuss some of the points of view I’ve shared (or some that you discovered) or you’d like to discuss your future, I encourage you to reach out to me at your earliest convenience.