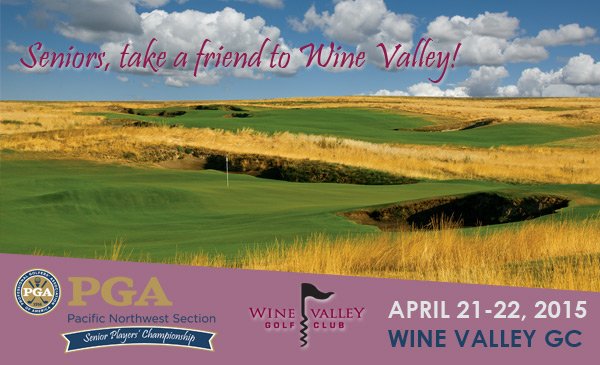 Entries are now available for the PNW Senior Players’ Championship, to be held April 21-22 at Wine Valley GC. Mark Keating is expected to be back to defend his title against a full field of Senior PGA Professionals, including host professional John Thorsnes.

Senior Professional, bring an amateur friend and compete for individual and team prizes! There are individual professional and amateur competitions, with gross and net payouts. The team four-ball competition will be based on gross scores only. Senior Player of the Year and Senior Hudson Cup points are available; for amateurs, the WSGA and OGA are offering Senior Hudson Cup points as well.

Mark Keating of Pumpkin Ridge – Ghost Creek won this event in 2014 (and previously in 2012). Watch the video.

In addition to fantastic golf, take time to enjoy one of the many winery tours available in Walla Walla. The Walla Walla Valley has been called “the next Napa Valley,” and for good reason. Here, winemakers from around the world are growing the next generation of legendary wineries. http://www.wallawalla.org/wineries/