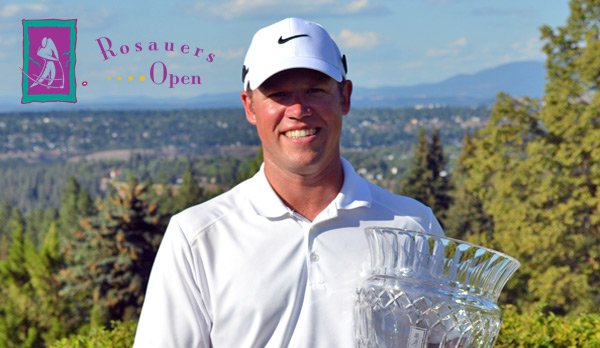 PGA Professional Corey Prugh of Manito G&CC (Spokane, WA) won his fourth Rosauers Open Invitational by one stroke after firing rounds of 67-64-64-195, 18-under par. Prugh had to knock in an eight foot birdie putt on the 18th hole to win by one stroke over PGA Professional Derek Barron of Tacoma Golf Center (Tacoma, WA) who made a 30-footer on the last hole for eagle. Barron recorded a competitive course record score of 59 earlier in the week (in the Umpqua Bank Pro-Am on Wednesday).

Low amateur honors went to Eric Ansett also of Manito G&CC who finished in a tie for fourth place.

PGA Professional Craig Schuh of Deer Park GC (Deer Park, WA) made a hole-in-one during his final round on #13.

The official charity of the Rosauers Open Invitational is Vanessa Behan Crisis Nursery. Proceeds from the event will benefit the Vanessa Behan Crisis Nursery, Spokane’s safe haven for children at risk of abuse and neglect. The Nursery also provides counseling, education and referrals for parents of young children. The 2015 event raised $135,000 for the charity, with $2,600,000 raised through the years. To learn more about the charity or to make a donation, please go to http://www.vanessabehan.org

The Rosauers Open Invitational started in 1988 when a group of Spokane area Golf Professionals realized their goal of bringing a Pacific Northwest Section Major to town, which they achieved by developing a relationship with Rosauers Supermarkets. The tournament has almost always been held at Indian Canyon GC, which was designed by E. Chandler Egan – who also designed Pebble Beach GC. PGA Professional Derek Barron of Tacoma Golf Center recorded Indian Canyon’s competitive course record score of 59 in the 2015 championship. The tournament record of 192 was set by Corey Prugh in 2009. Prugh also holds the record for the most wins (2009, 2011, 2013, 2015). The biggest winner at this championship is the Vanessa Behan Crisis Nursery charity – over $2.6 million has been donated since the tournament’s inception.