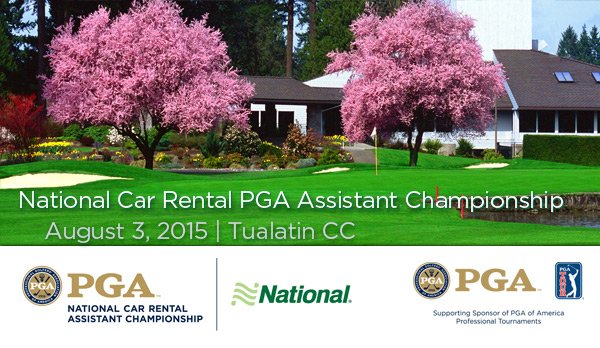 The entry deadline for the National Car Rental PGA Assistant Championship is Tuesday, July 21 at 2:00 PM. We will play 36 holes at Tualatin Country Club on Monday, August 3.  Please pay close attention to the entry deadline for this event. Every year at least one of our assistants misses the deadline – please doesn’t let this happen to you!

You may register for this event through PGA of America Membership services at 800-474-2776 or at www.pgatournaments.com

Eligibility: You must be employed as an A-8 or as an Apprentice (including Apprentice Head Professional) as of July 21 to be eligible to play in the Section National Car Rental PGA Assistant Championship.

Advancement: This is the biggest Section event for apprentices and assistants! It offers the opportunity to advance to the 39th PGA Assistant Championship, held October 29 – November 1, 2015 at PGA Golf Club – Wanamaker Course in Port St. Lucie, FL.

Encourage your employees to enter: The more players who sign up, the more spots our Section will receive to advance to the National Championship. Additionally, the purse increases as our players increase!

This year’s Assistant Championship marks the 40th Anniversary as a National event but the PNW Section has been conducting the event since Fred Pelzer donated the trophy in 1965.

The National Championship tradition began in 1976 to recognize the role of the PGA Assistant Professional and how important he or she may be in the success of a golf facility as well as our entire Association. They represent more than 10,000 men and women assistant professionals and registered apprentices nationwide.

Malby and Cassidy both birdied the first hole of the playoff. They proceeded to both par the second and third hole before Malby made a fantastic birdie on hole four to win the National Car Rental Assistant Championship.

View all past champions

Since its inception in 1912, Tualatin Country Club has established a reputation as one of the finest country clubs in Oregon. The course is a Chandler Egan Design, defined by large Douglas fir trees, tight fairways and small greens. Located just few minutes south of Portland, Tualatin County Club offers a private picturesque setting. Head PGA Professional Sean Fredrickson is excited to host.

See you at Tualatin Country Club!