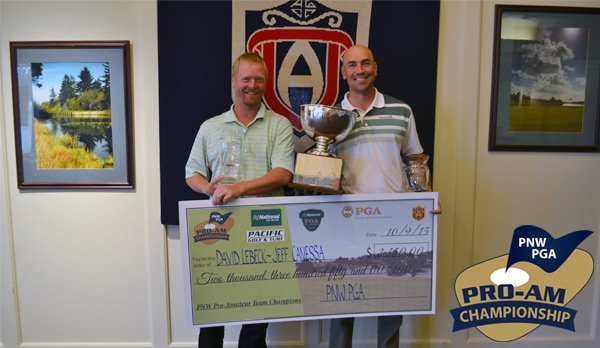 The team of host PGA Professional David Lebeck of Astoria G&CC (Warrenton, OR) with amateur Jeff Canessa won the PNW Pro-Amateur Championship by one stroke after firing Four-Ball scores of 64-67-131, 11 under par. Finishing in a tie for second place was 2012 Champions PGA Professional Luke Baker of Deer Park GC (Deer Park, WA) with Jim Bob Coleman and PGA Professional Tim Hval of Portland GC (Portland, OR) with his amateur Bob Harrington.

David Lebeck had a fantastic summer. Back in June he won the Oregon Open Invitational featuring the National Car Rental Pro-Am as well.

Sponsored by National Car Rental, the Official Rental Car of The PGA of America, the event is one of nearly 100 new and existing amateur tournaments across the 41 PGA of America Sections nationwide being linked together to form the Pro-Am Series. National created the tournaments to help further the PGA of America’s mission to grow interest and participation in the game of golf at local levels. The Series will run February through October 2015.