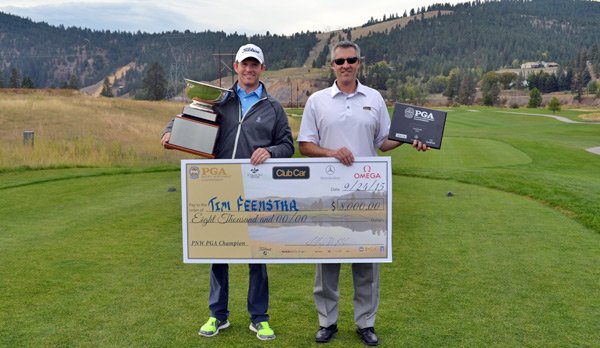 PGA Professional Tim Feenstra of Broadmoor GC (Seattle, WA) came from five strokes behind PGA Professional Brian Thornton of Meridian Valley CC (Kent, WA) to win his third Pacific Northwest PGA Professional Championship in a playoff.  Feenstra had six birdies on his way to his 6-under par 66 to force Thornton into a playoff.  On the first hole of the playoff, Feenstra birdied to win after Thornton’s birdie putt narrowly missed.

Feenstra has previously won this event back in 2011 at Illahe Hills CC and 2013 at Meadow Springs CC.

PGA Professional Clint Ables of Wildhorse Resort GC (Pentleton, OR) and PGA Professional Brian Nosler of Golf in the Pearl (Portland, OR) finished in a tie for third place.

Additionally, the low 20 scores at the 49th PGA Professional Championship next June will earn a place in the 98th