Behavioral Finance: The study of how psychology affects finance

Psychology is the basis for human desires, goals, and motivation. In addition, psychology is the basis for a wide variety of human errors that stem from perceptual illusions, overconfidence, over-reliance on rules of thumb, and emotions. Wikipedia has 54 pages in this category. Some items have been covered in previous issues of Foreword Press pertaining to rational fears, spotting trends that are not there, herd behavior (Foreword Press, issue March 2013), loss aversion and risk taking.

Let’s glance at the chart below showing money fund inflows—frightened money tearing out of the stock market—spiking to levels previously seen in the euro “crisis,” the fiscal cliff “crisis,” and the taper tantrum “crisis” of the last few years. That the euro was never our crisis, and that the other two were merely episodes of baseless mass panic, are irrelevancies in the context under discussion. A flight to cash like this is evidence of full-blown panic. 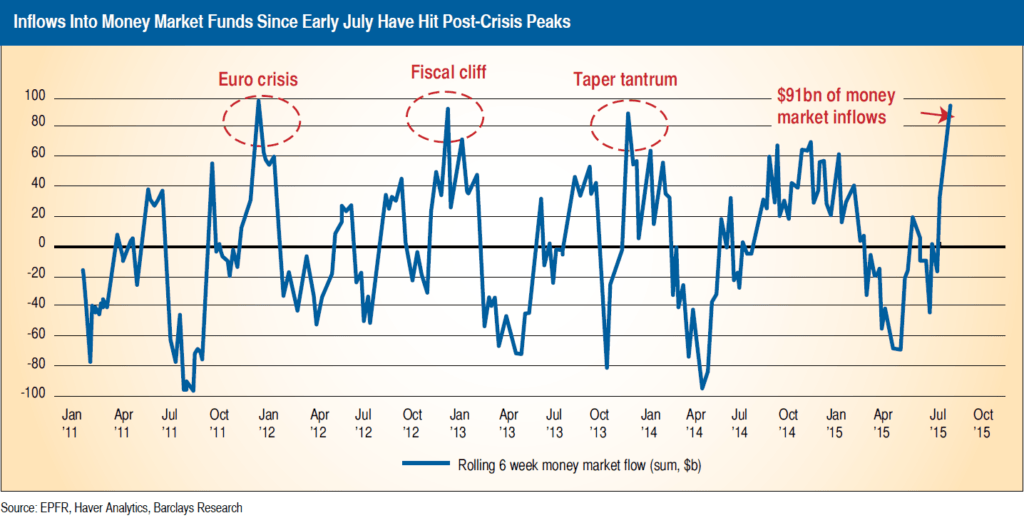 Maybe it was widespread agitation over when the clueless Fed will begin raising interest rates from zero to something infinitesimally greater than zero. Or maybe it was just simple that the market seemed range-bound anyway, so all the gun slinging portfolio managers we saw on TV went to cash, just to ensure that their end-of-summer holidays wouldn’t be disturbed.

It certainly can’t be home prices, or home sales: you’re starting to hear bidding war stories again, and single-family home building permits are up something like 19% year over year. It can’t be stock buybacks, cash dividends and/or M&A, all of which are shooting out every light in the joint.

Can’t be the job market, where wages are ticking up at just about every level, with skilled labor shortages rampant and rising, even as the overall labor force participation rate ticks down. Gross production was revised from an original estimate of 2.3% to 3.7% during all the noise.

One can go on and on like this, to no useful effect. How exactly might one go about making investment policy out of “why”? The facts of the matter are more than sufficient to the case: we’ve gone (at this writing) 1,419 calendar days without a 10% correction—the third longest such run in the last half a century. It’s been 20 years since we’ve had a single year without at least a five percent drop.

We were overdue. That’s all. We were just… overdue.

If you have children who grew up with you during the dot.com bust and a few years later during the housing bust, they are probably more apt to doing things differently than you, right? Not that our kin don’t already have this behavioral characteristic until they have that moment when you were right all along. As it turns out, most young people out of school who have money are not investing in anything, many are not buying homes, and see cash as king so they can live the phrase “you only live once”. Quite a travesty in my opinion. There are many ways to look at client behavior. It is important to remember from an adviser’s point of view, every individual is unique. We ask, “Are you perfectly happy with the financial advice you’ve been getting recently?” If your answer is not a hundred percent yes, “Can you see the wisdom of getting a second opinion at this point?”