Did you know that DALBAR performed extensive research on the behavior of mutual fund and index investors (which had no expenses) and concluded a wide gap in investor returns versus the S&P 500 with dividends over a 20 year period ending December 31, 2011. This amazes me because I still hear commercials and news broadcasters talk about how Wall Street is rigged and it’s some kind of dangerous casino. Truth be told, the average investors get in their own way. When volatile times present themselves (as they are known to do at inopportune times), the emotional right brain takes over and we act on that emotion by doing the absolute wrong thing at the wrong time. Let me expand a bit.

There is an Archeologist site in Beulah, Wyoming that was once home to Apache and Kiowa hunters. As Meriwether Lewis recorded, one of the young hunters would disguise himself in a buffalo skin, stand in front of the herd and start running for a cliff, stopping at the last moment to hide behind a rock. How effective was this? At the base of this single location, scientists have discovered an estimated 20,000 buffalo. This kind of instinctive impulse to move as a herd is encoded in the genetics of other animals as well, including humans!

One doesn’t need to dig too deeply to see these instincts at work in the stock market. Back in the year 2000, everyone was talking about the dot.com blast and nobody wanted to miss out because this time was different, right? Never in history had computers been so influential and efficient. You can see in this bar graph (below), all the people piling into stock right before the market crashed, the herd gathering steam. The far left green colored bar represents the amount of money flowing into stocks first quarter in that year. Then two years later, we saw the herd head over the cliff, as investors fled stocks just ahead of a steady and prolonged rise in the stock market. At the end of the decade, we had the financial crisis. Once again, fueled by emotion, investors left the stock market in a big way – again the herd at work. And of course, what do you think bond investors were doing back in the first quarter of ’00, Q3 ’02, Q3 and Q4 of 2009? They were getting in at the very worst time in an attempt to find safety! Not surprisingly, investors who piled into bonds at the end of the decade went with herd in a dangerous direction, despite yields that might not even keep pace with inflation. 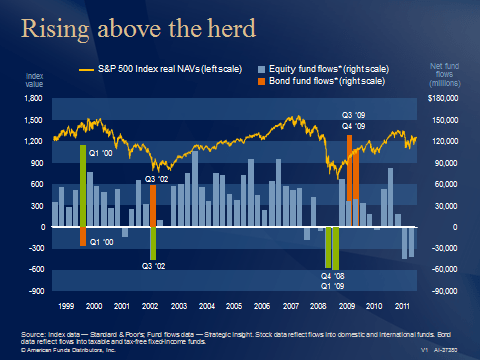 You can see how emotions can and do have an impact on our investments, and how that could cause your portfolio to fail to capture the market return. The good news is that it’s not all bad news. You have a guide to help you with your investments, no matter what your emotional right-brain is telling you at any given moment. Your financial advisor is your guide to the future.

Remember, it’s your money, your life, and your plan. Reach out to us to see how we might help with your plan and emotions through the next recession.