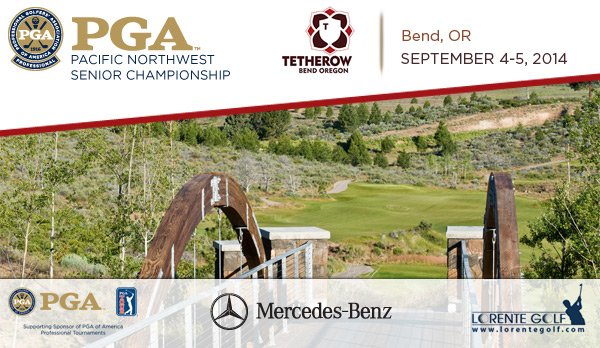 We are still accepting Section entries for our Senior PGA Professional Championship at Tetherow Golf Club in Bend, OR. The event will be held Thursday-Friday, September 4-5.

If you want to sign up for PNW Senior PGA Professional Championship, please CLICK HERE   This SEPARATE (and additional) entry is for a chance to play for the purse and title of Senior PGA Champion.

The Senior PGA Professional Championship was established in 1952. Back then, the championship was held at the Yakima Elks’ G&CC with only 21 professionals battling it out for the mere sum of $920 dollars. The famous Bob Duden won the championship six times during the 70’s and seven times overall. Today this is a popular event for Section seniors.

Last year, Jeff Coston of Semiahmoo won the PNW Senior PGA Championship in a playoff against Tom Sovay of The Golf Club at Redmond Ridge.  He previously won this event from 2006 – 2011.

Tetherow was designed by renowned architect David McLay Kidd. Kidd was raised at Gleneagles in central Scotland playing early golf over the famous James Braid designed Kings Course, and is now one of the leading golf course architects in the world. Among his credits is Bandon Dunes on the Oregon Coast, a course consistently named by Golf Magazine, Golf Digest and Golfweek as one of the world’s best.

The design incorporates elements of the seaside links David grew up with in his native Scotland: fescue grasses, deep uneven bunkers, rippling fairways and run-up areas to the greens.

Reminder – the Senior PGA Professional Championship has Senior Hudson Cup points (worth 1.5 times the normal value) and Senior Player of the Year points!  Plan on playing!

Seniors – hope to see you in September at Tetherow GC!