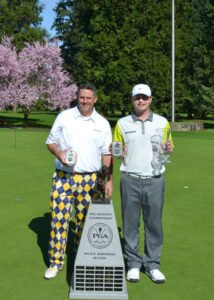 Field – 61 teams of two Professionals from the same facility

There was a four way tied for third place.  They were the teams from Astoria G&CC, Linden G&CC, Meriwether National GC and Tacoma Firs Golf Center.

The Pacific Northwest Professional-Assistants Championship started in 1992, when the event got off to an exciting start.  It took the Progress Downs team of Jerry Minor and Ralph West SEVEN holes of sudden-death to finally shake the Royal Oaks duo of Steve Bowen and Michael Wilkerson.  After shooting 14-under at Tacoma Country and Golf Club, neither of the two teams could get a birdie putt to drop in the playoff.  The 1995 RedwoodGolfCenter team of Scott Williams and Mike Barnett still holds the tournament record after scorching the rest of the field with an 18-under 126 at McCormick Woods GC and winning by three strokes.  This championship has fostered camaraderie between the Head Professional and his Assistant and is one of the most popular events of the Pacific Northwest Section PGA.  In 2008, Head PGA Professional Steve Prugh and his Assistant Corey Prugh made history by being the first father-son duo to capture the title which they won again last year.

Royal Oaks Country Club was organized in August 1945 by a group of 50 downtown businessmen who wanted to make a dream come true. Each individual put up $1,000 and purchased 170 acres of land near Orchards – the home of the first nine holes. Royal Oaks was open for play in 1947 as a member owned club. The second nine was opened in 1952 and a new clubhouse followed.

Royal Oaks has always been known as a long, tough tree-lined golf course. It is a popular tournament site and has hosted all major Northwest tournaments. Recent tournaments include the PNGA Amateur where Tiger Woods won in 1994 and Nick Flanagan in 2003. Royal Oaks has been consistently ranked in the top 5 golf courses in the state of Washington, and have been ranked in the top 100 nationally by Golf Digest Magazine.