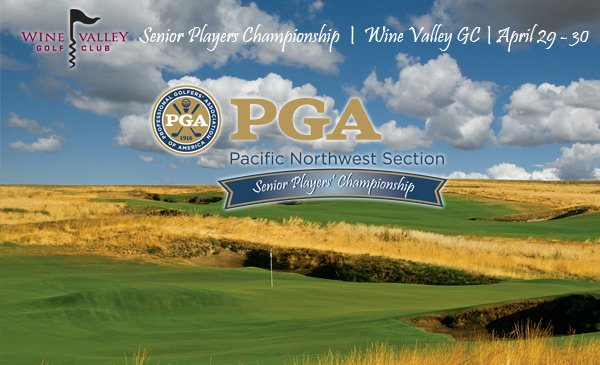 The team entry is now available for the Senior Players’ Championship at Wine Valley Golf Club in Walla Walla, WA on April 29-30th.

There will be individual professional and individual amateur competitions, with gross and net payouts.  The Team Four-Ball Competition will be based on gross scores only.

PGA Professional Jeff Fought of Black Butte Ranch GC birdied the first extra hole to defeat PGA Professional Tom Sovay of The Golf Club at Redmond Ridge to claim the Senior Players’ Championship at The Reserve Vineyards and Golf Club.  They scored a three under par 141 for the two rounds.  Mike DeLong of Coeur d’Alene Resort was two back at 143.  Byron Patton of Rose City GC was low amateur at 144.

The team of PGA Professional Tom Carey and his amateur Dave Lydell of Meriwether National GC won the Four-Ball competition after shooting rounds of 64-66-130, 14-under par.  They won by one stroke over the team with PGA Professional Steve Bowen of Dick’s Sporting Goods and amateur Tim O’Neal from Royal Oaks CC.

Wine Valley Golf Club, which opened in April of 2009, has been rated 5th on Golfweek’s Best New Courses.  To produce Golfweek’s Best New Courses list, a nationwide team of more than 475 evaluators rated the layouts on the basis of 10 criteria, including routing, conditioning, variety and memorability of holes. The result is an average of scores, which then dictates a course’s overall ranking.

We look forward to you joining us for the Senior Players’ Championship!