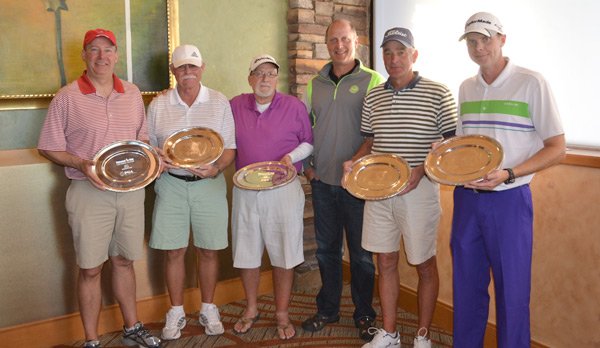 The team from Meadow Springs CC headed by PGA Professional Jason Aichele and his amateurs Terry Gilmore, Wayne Banko, Chris Sonnichsen and Mike Aichele came out on top after the three day championship.

Aichele also won the professional honors for the week while Mark Gardner of The Creek at Qualchan came in second.

The Holcomb-In-One Las Vegas is a five-man team, of one professional and four amateurs playing stableford competitions.  There were daily team prizes, professional prizes, amateur gross and net prizes as well as overall prizes for the professionals, amateurs and teams.  There were many different ways a player could cash besides at the casino!

Teams played Monday at The Legacy GC, Tuesday at Tuscany GC before returning to new favorite Anthem CC on Wednesday.

Representative Grant Holcomb returned as title sponsor of this championship and is bringing his companies Antigua, Slazenger, Sun Mountain Sports, VooDoo Performance Towel, Range Servant and Imperial Headwear with him.