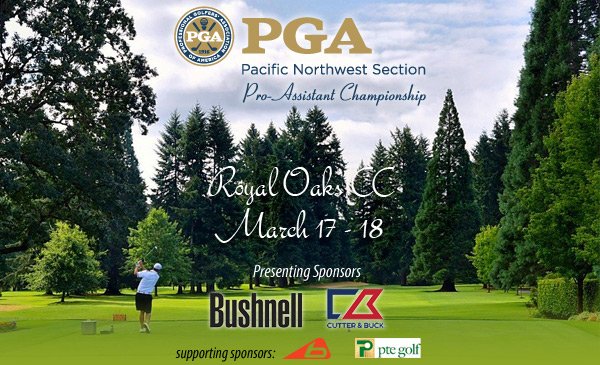 Entries are now available for the PNW PGA Pro-Assistant Championship at Royal Oaks CC on March 17-18th. Head PGA Professional Scott Leritz is excited to host this year and invites you to join us for both the tournament and our Spring General Meeting which will immediately follow our first round at 7:00 pm. You are all invited to attend.  Dress attire for the meeting is golf attire but it is okay to wear a jacket!

Bushnell and Cutter & Buck are returning with Rep’s Sally Schmitz and Bryan Dickson as Presenting Sponsors. Bolle’ and PTE Golf are being added as Supporting Sponsors. Thank you!

The Pacific Northwest Pro-Assistant Championship launched into the tournament world in 1992 with a seven hole sudden-death match between the Progress Downs team of Jerry Minor/Ralph West and the Royal Oaks team of Steve Bowen/Michael Wilkerson with the Progress Downs’ team being victorious.

View past Champions of the Pro-Assistant Championship.

Royal Oaks Country Club was organized in August 1945 by a group of 50 downtown businessmen who wanted to make a dream come true. Each individual put up $1,000 and purchased 170 acres of land near Orchards – the home of the first nine holes. Royal Oaks was open for play in 1947 as a member owned club. The second nine was opened in 1952 and a new clubhouse followed.

Sally Schmitz is back as a sponsor of the Pro-Assistant Championship with Bushnell.
Bushnell has been the industry leader in high performance sports optics for over 50 years while offering cutting edge technology on a wide array of rangefinders.

Bryan Dickson is also a returning sponsor with Cutter & Buck. Cutter & Buck is a premier line of golf-inspired apparel for men and women who appreciate innovative, high-quality sportswear and was founded in Seattle, Washington in 1989.

We hope to see you at the Pro-Assistant Championship and our General Meeting at Royal Oaks CC next month!